How Cameroonian Man, Alber Noir Went From Commercial Motorcyclist To A Supermodel 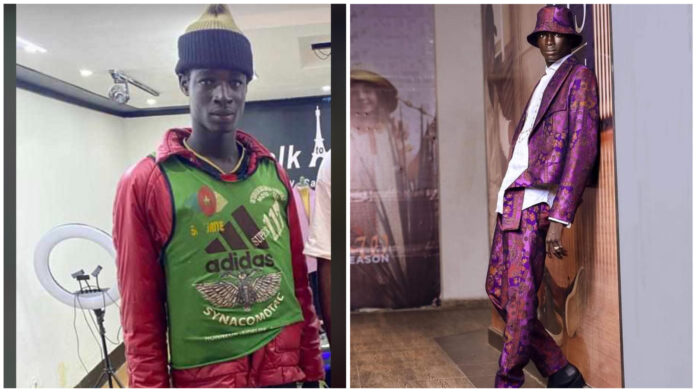 The story of a young Cameroonian named Alber Noir surprised many netizens as the young man found favor in the eyes of Sawali Noir and Sulet Noir, who facilitated his “Grass to Grace Story” by recruiting him as a model for their brand.

Like any other commercial motorcyclist, Alber made a living from his day-to-day business, transporting passengers and goods around the capital, Douala.

On one of his service days, Alber made contact with Sawali and began serving him in his personal affairs, working with him as a personal “motorcyclist” for about a year.

This relationship, which started from a simple interaction between a service provider and a customer, soon sparked the international success of both characters.

Noir, while interacting with Sawali, told him of his stressful work hours and hustle to make a living. This caused Sawali to consider him a good candidate for a “modeling gig” due to his beautiful dark skin and admirable height.

He was considered for a photo model position for the brand and was completely transformed with a good monthly salary.

Many media outlets featured the story as their favorite Grass to Grace story. Meanwhile, the clothing line has labeled him; “DIAMOND IN THE DUST!”

These creative fashion designers; Sawali Noir and Sulet Noir researched and selected the best model that fits their vision and Alber (the cyclist) delivered.

The outstanding Cameroonian stylist took to his social media page to introduce his latest addition with these words;

“Sometimes we dig very far in search of gems, although we have a lot buried behind our houses. There is nothing better you can do for a person than to appreciate, respect and appreciate them.

So this is Alber Noir, the newest member of the “Walk to Walk To Paris” by the Sawali Noir family. Overnight he went from commercial motorcyclist to brand model and official face of the new THE CARTERS III collection.”

The emergence of African models has since been discussed especially in the European fashion industry, where African stylists are being hailed for their works.

Recall that British Vogue ushered in a new era that puts African fashion in the spotlight. The magazine’s February issue featured nine black models of African descent on the cover, including Adut Akech.