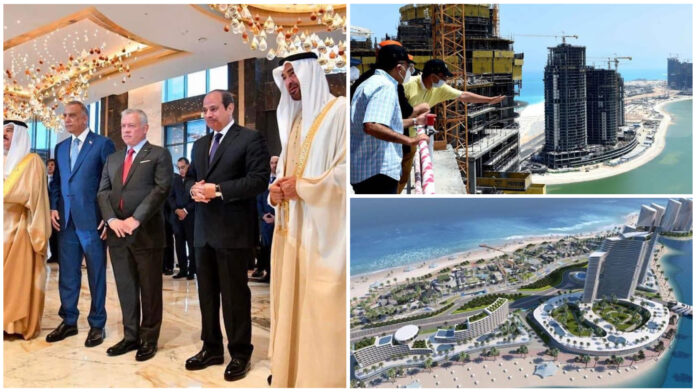 Egypt has officially inaugurated the city of New Alamein, 200 km west of Alexandria. President Abdel-Fattah El-Sisi and his Arab guests visited the city and the north coast resort of Regal Heights on Monday night, to celebrate the incredible Egyptian achievement.

Leaders of the five Arab countries met earlier in the day to exchange views on strengthening bilateral ties and optimizing means of strengthening cooperation between them, Rady said.

Earlier on Monday, El-Sisi and Sheikh Mohamed bin Zayed, who arrived in Egypt on Sunday for bilateral talks with the Egyptian president, welcomed the other three Arab leaders at Alamein International Airport.

The Five-Way Arab Meeting in New Alamein took place as the five Arab countries stepped up efforts to strengthen economic integration among them.

New Alamien City is becoming a new tourist hub in northwest Egypt to attract new Arab and European tourists in the summer.

It is not expected to compete with traditional Red Sea tourist destinations such as El Gouna, Hurgada and Sharm as they are positioned as a winter destination for northern and eastern European tourist markets.

A 250 km highway that crosses the western desert was built specifically for this city, linking it to Cairo.