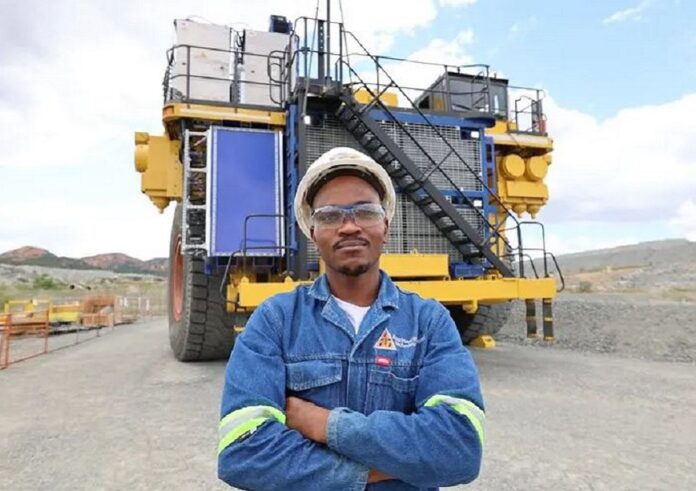 Recall that South Africa became the country with the largest hydrogen-powered truck on Friday. The truck was launched earlier at a platinum mine in the country. According to Anglo American; a well-known mining company in Africa; the unveiling of the 220-tonne truck is to replace the diesel-powered trucks earlier used by the company.

As reported by AFP, the newly launched truck has a lot of benefits. Including the fact that it uses two-megawatt hydrogen fuel cells to lift and transport at least 290 tones of Ore. The truck, now tagged an incredible innovation, was displayed first at the Mogalakwena mine; around 250 kilometers from Johannesburg.

Present at the unveiling of the trucks, South African President, Cyril Ramaphosa explained that; what South Africa has just done by creating the truck is simply beyond the creation of single machinery. It will serve as the beginning of a hydrogen-powered ecology.”

According to AFP, Lekgau who had been working as a diesel machine assistant, heard about the project in 2021. He then proceeded to courageously volunteer to be one of its first operators. Lekgua went through series of tests in 2021; many of which he passed. Passing these global tests made him become the sole candidate to operate South Africa’s “Wonder-Truck.”

In an interview with AFP, when asked about his experience with the truck, Lekgau said; “Being the first in Africa to oper­ate and work on this machinery is a great oppor­tun­ity to grow my career in the world of hydro­gen oper­a­tions. It is going to be the toughest expos­ure and exper­i­ence for me because I have to make a lot of adjust­ments; like get­ting famil­iar with the truck and util­ising the new driv­ing skills and being accus­tomed to the life­style,” he said.

Recall that the Anglo-American mining company stated its intentions for South Africa by 2040. It explained that its plan is to make its operations carbon neutral by 2040. AFP explained that it will “divide water into its component atoms of hydrogen and oxygen using solar power.”

On the other hand, South Africa became a beneficiary of billions of dollars from France, Germany, and the U.K. The purpose of this grant was to encourage the African nation in its transition to a low-carbon economy. According to reports at the time, the deal agreed in Glasgow during COP26 in November aims to improve the country’s electrical generation infrastructure.

Read also; Ukraine refugees who enter UK via Ireland to be sent to Rwanda