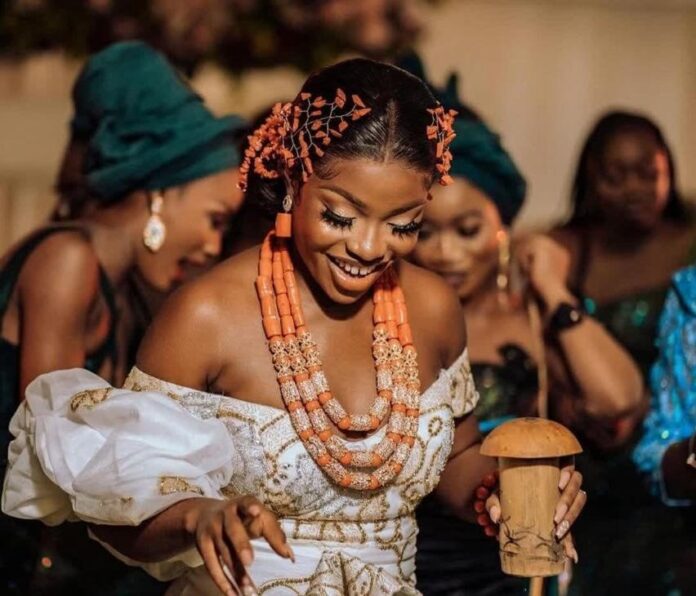 There are several amazing marriage traditions in Africa. African traditional weddings are beautiful and rooted in spirituality and celebration and one of such wedding traditions, is the Igba Nkwu (Wine Carrying) Traditional Wedding Ceremony of the Igbo people. The Igbo people are the indigenous people that live in the Southern part of Nigeria, in West Africa. They are one of the largest ethnic groups in West Africa. To the Igbo people, who are called Ndi Igbo; the Igba Nkwu is more important than a church wedding or a civil wedding.As an Igbo girl, one of her best days, is the day of her Igba Nkwu. 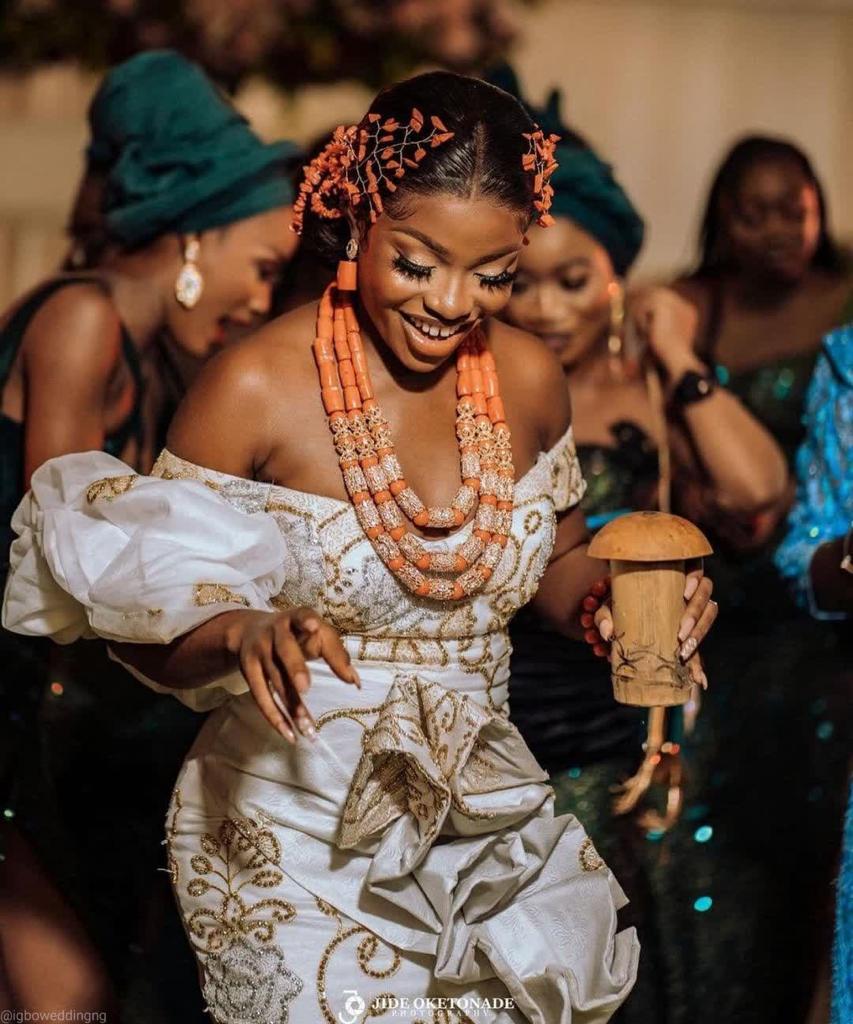 Traditional marriage is a thing of pride for the female child in Nigeria. When you are an Igbo girl/woman, a traditional wedding is the public declaration of the love of your life that he is committed and willing to do life with you. 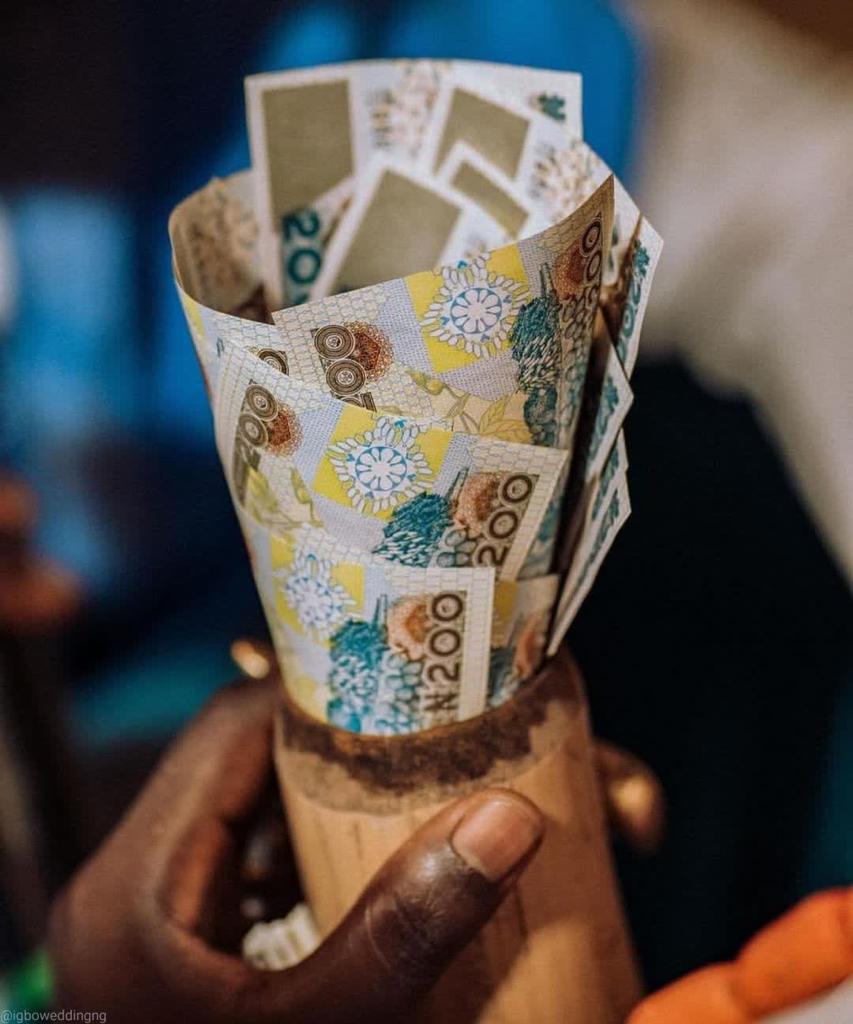 There are many tribes in Nigeria and within all the tribes, the family structure does not take lightly the significance of the traditional wedding.

Igba Nkwu, the Igbo traditional wedding is festive, colorful and a ceremony that will light up your soul, and fill your mouth with laughter.

It is divided into four parts.

Once the four parts are satisfied according to the demand of the family of the bride, the groom can go to his home with his bride. 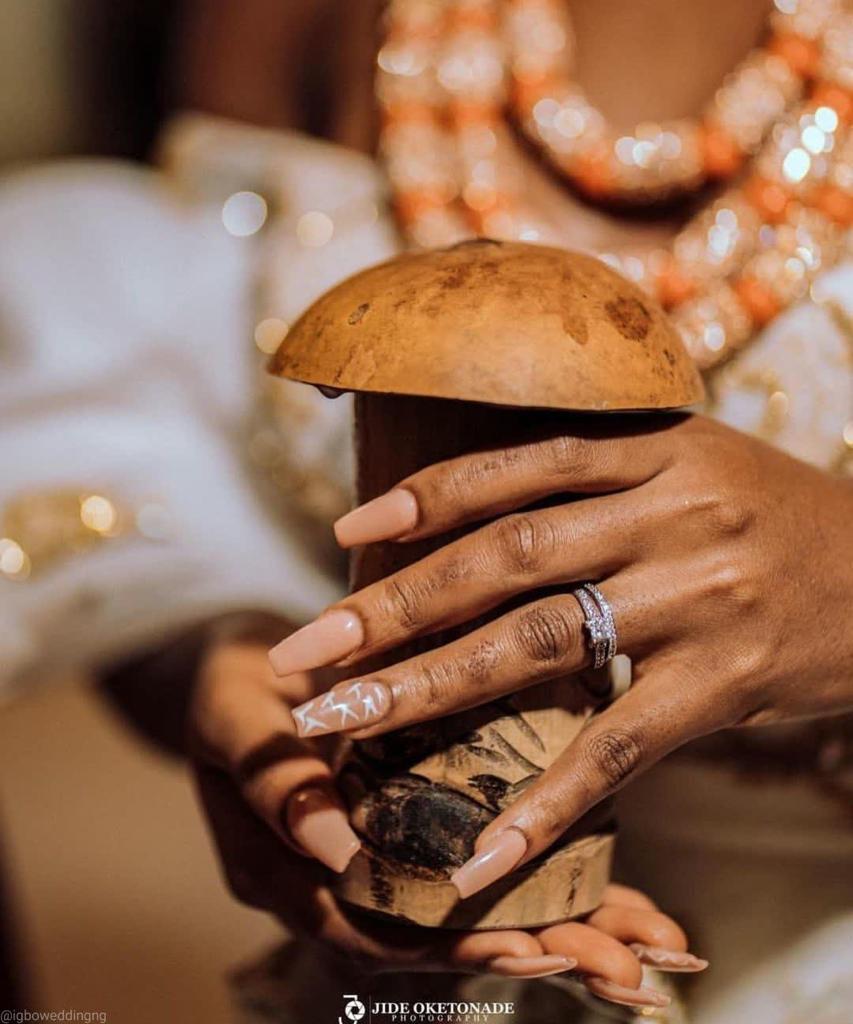 In the movies, you see the man get down on his knee and propose to his girlfriend. In Nigeria, when a man wants to be romantic he starts planning his Igba Nkwu.

The first step in an Igbo traditional wedding is the visit to the bride’s family. His father or the eldest male member of his family accompanies the groom. This is permitted if his father is deceased.

They come empty-handed because the words Iku and you use means the art of coming to knock or inquire. They may come with brandy and kola nuts as a sign of goodwill.

The groom’s father will carry on the conversation with the bride’s family or guardian and speak on the reason for the visit. He is to express the interest of his son to marry their daughter.

Shortly after this, the parents call out the bride and ask if she knows the suitor and wants to marry him. The response of the bride determines the progress to the next steps. 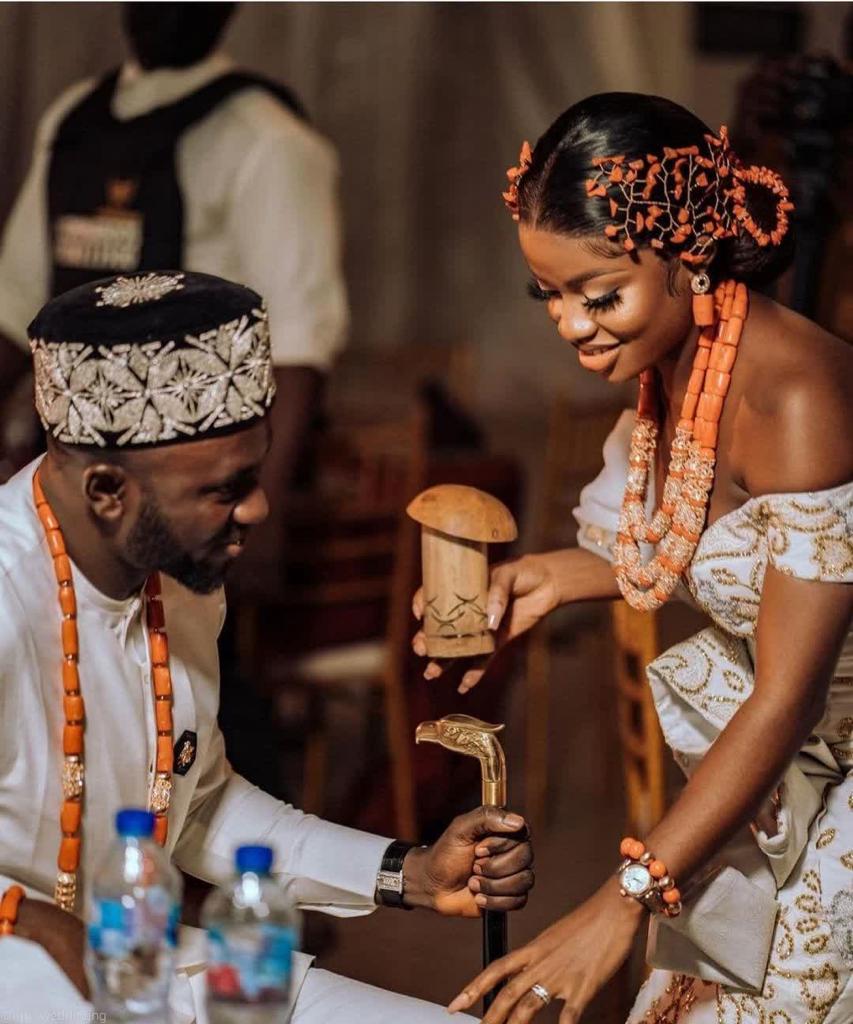 Investigations begin on the groom’s family and they check their background and history. Some of the factors they check are the presence of hereditary illness, untoward behavior, divorce, fertility, etc. The results of the check determine the progress to the next steps. The bride’s family sits and determines the capability of the groom to care for their daughter and the children she will have in the future. They assume that the family of the groom has carried out some investigation on the bride’s family.

According to Igbo tradition, the groom is to present some gifts. A list of kola nuts, palm wine, beer, soft drinks, tobacco, snuff, and a goat is presented. The groom and bride’s family share them. 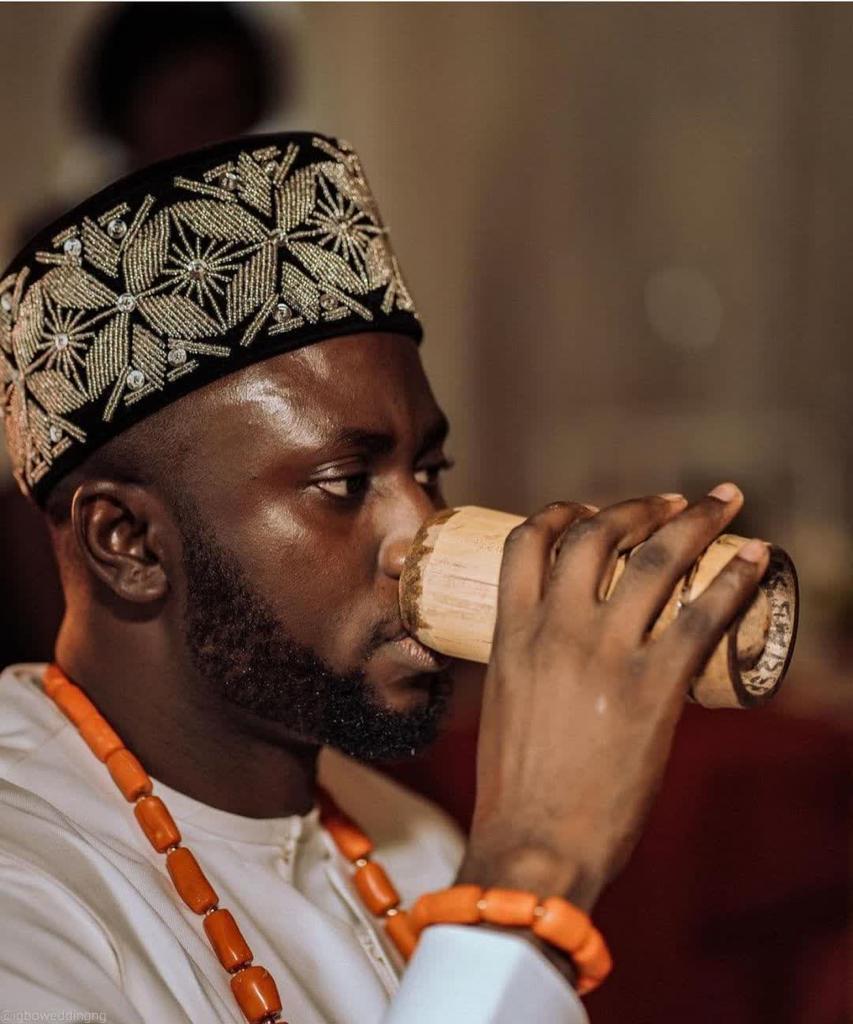 The groom and his family, having gotten consent to proceed with the negotiation of the bride price. The payment is called Ime ego and the groom’s family asks for the engagement gifts list. It differs based on your state of origin. The money paid for the bride price is often as low as N30. This is so that everyone knows that the worth of the bride does not depend on this price. The gifts to be given to the family of the bride makes up the larger part of the bride price. They give all they bought to the bride’s family on the date chosen for the wine carrying ceremony. 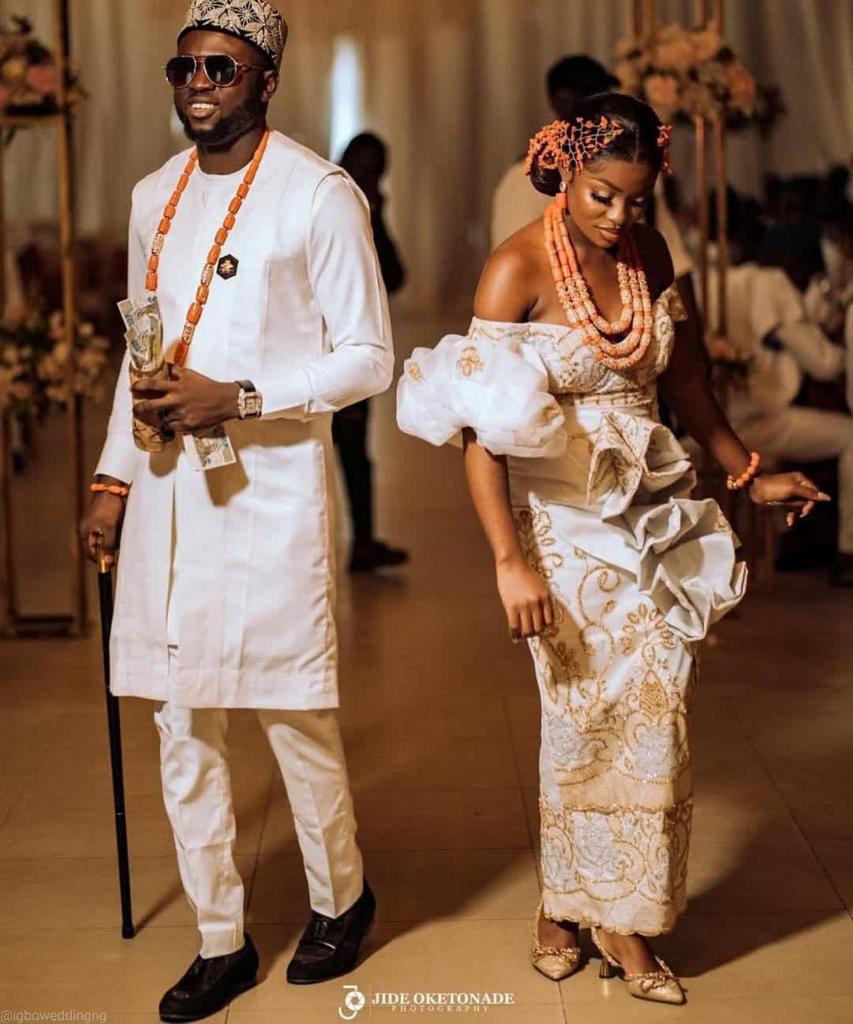 This is the most exciting part of an Igbo traditional wedding and the crescendo of all the preparations. After the wine-carrying ceremony has been set, the bride and her family begin preparations. The ceremony is located in the home of the bride’s family. They prepare a great feast for the groom’s family and their guests. They also lease a live band and traditional dancers to secure the best entertainment.

The bride is attractively dressed in the typical Igbo traditional wedding attire which includes a blouse, double wrapper, red coral bead necklace, and a head tie (Ichafu). This can be interchanged with beads around her head like a crown.

The groom comes with a larger party that includes his friends, he comes with the bride price list. Also with him are the gifts for the Umunna before the ceremony begins.

Highlights of an Igba Nkwu Wedding

The most exciting part of an Igba Nkwu wedding is when the bride points at the man that she wants to traverse life with. The father of the bride or her eldest uncle prays for the bride and blesses her marriage. Then he gives her a cup of wine enclosed in a gourd and asks her to find the one who she has chosen to spend her life with forever. The bride, followed closely by her maidens begins to search the crowd with the wine in her hand. When she finds him, she kneels and offers him the drink in her hand.

When he takes a sip of the wine, the crowd gathered to know that he is her husband. Acceptance on the part of the bride and the groom depict to everyone gathered that they are officially man and wife. They then dance together to her parents who pronounce blessings on them. Friends and family present gifts to them and merriment continue.

Idu Uno is the process where the bride visits the groom’s home for the first time. A maiden or an unmarried sister accompanies her. Before commencing on the journey, the bride’s family gifts her cooking utensils, bedsheets, sewing machine, bed, pillowcases, plates, clothes, and what she needs for her new life and new role. The sister or family member returns home with news of how she is doing in her new home.