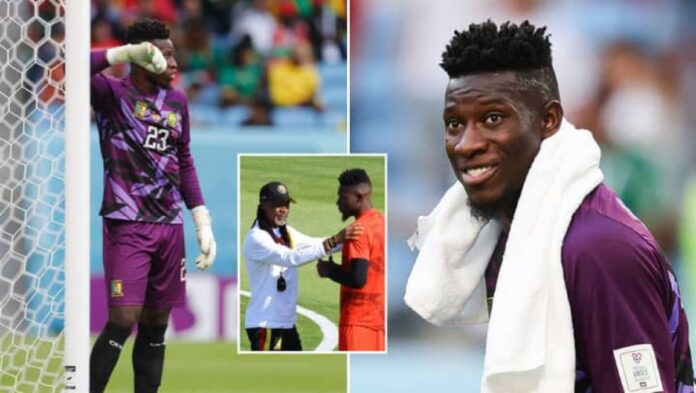 Cameroon goalkeeper Andre Onana, 26, who was dropped from Cameroon’s 2002 World Cup squad for “indiscipline”, announced his retirement from the national team in a tweet on Friday.

He explained: “Every story, no matter how beautiful, has an ending. And my story with the Cameroon national team has ended.”

At the age of 26 and with 34 caps, the Inter goalkeeper ended his international career after the 2002 World Cup, which was marked by a collective suspension for “lack of discipline”, without giving the reasons for this break.

The former Ajax Amsterdam goalkeeper was a key player in the Africa Cup of Nations in January-February, where host, Cameroon finished third.

He was goalkeeper for “Indomitable Lions” in their first World Cup match against Switzerland, which they lost 1-0.

Also, read; Shell to Pay €15 Million in Settlement To Locals over Oil Spills In Nigeria

But Onana was later thrown out of the group for “lack of discipline”, Cameroon coach Rigobert Song announced on 28 November after his second group game against Serbia (3-3).

The coach explained in a press conference after the game: “As a group you have to respect the rules, I’d rather keep the team than the individuals.”

“We will have time to better explain what is at stake, but we must confront those who are willing and able to defend the country’s colors,” he added.

The Indomitable Lions were eliminated in the group stage, despite beating Brazil 1-0 without Onana against Brazil, who had already qualified and rotated their roster.

In his farewell message, the Inter goalkeeper did not mention the reasons that he believes led to his sacking.