Archaeologists Discover Artifacts Dated Back to 2,500 years In Egypt 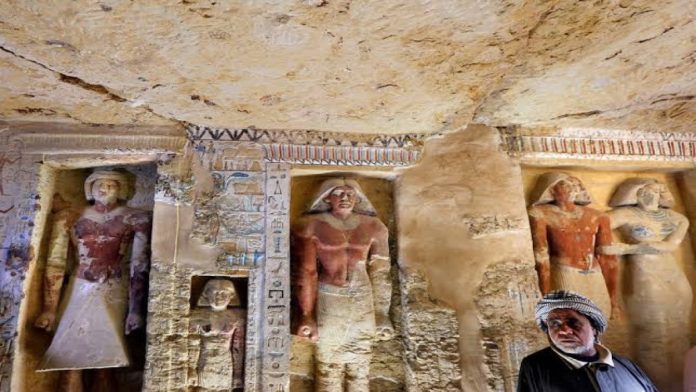 Egypt’s rich and fascinating ancient past never ceases to astound visitors, especially as the government has now revealed the discovery of a wealth of ancient artifacts dating back 2,500 years on May 31st.

Those medieval treasures were recently uncovered, according to the country’s antiquities authorities, at the famed necropolis of Saqqara near Cairo. They’re still in good working order.

Interestingly, some of these relics were found intact and in good condition by the Archaeologists. The archaeological mission team on the project, has been working in this area since 2018 and has uncovered several findings, including artifacts, coffins, and ancient Egyptian human and animal mummies.

Some said discovered relics were displayed in a makeshift museum beneath Djoser’s Step Pyramid, 15 miles (ca. 24 km) southwest of Cairo. The Step Pyramid of Djoser, erected around 4,700 years ago in Saqqara, was the Egyptians’ first pyramid.

On another note, the excavation team discovered a collection of 250 wooden painted coffins and the largest ever bronze cachette comprising a collection of 150 bronze statues of ancient Egyptian deities such as Anubis, Osiris, Nefertem, and Hathor, according to Mostafa Waziri, head of the Supreme Council of Antiquities.

In addition, archaeologists discovered 40 wooden coffins with mummies sealed inside and bronze objects used in Isis, the goddess of fertility in Egyptian mythology, all dating from the Late Period, around 500 B.C. Also on display was a headless bronze figure of Imhotep, the main builder of Pharaoh Djoser, who reigned Ancient Egypt between 2630 and 2611 B.C.

The treasures will be moved to the new Grand Egyptian Museum, a massive project currently under development near the world-famous Giza Pyramids just outside Cairo.

The Giza Pyramids, as well as the smaller pyramids at Abu Sir, Dahshur, and Abu Ruwaysh, are all part of a large necropolis in Egypt’s ancient city of Memphis. In the 1970s, the remains of Memphis were classified as a UNESCO World Heritage Site.

Egypt has made a big deal out of recent archaeological discoveries in the hopes of attracting more tourists. Following the 2011 uprising that deposed tyrant Hosni Mubarak, the country’s tourist industry, which is a major source of foreign currency, faced years of political unrest and violence.

The tourism business in Egypt has just lately begun to recover from the coronavirus outbreak. However, Russia’s assault on Ukraine has damaged it once more. Ukraine, along with Russia, is a key source of tourism in Egypt.