AU Leaders Convene To Seek Solutions To Terrorism In Africa 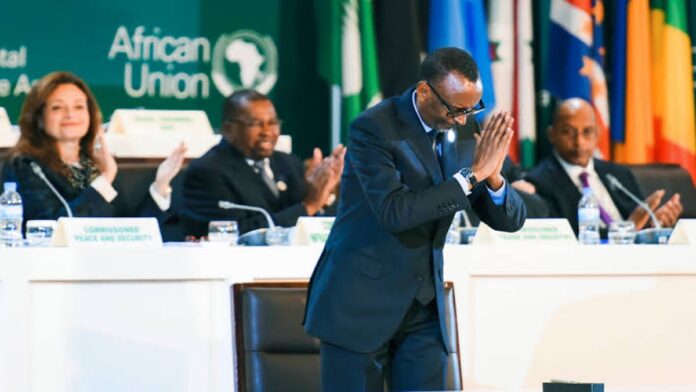 African leaders convened on Saturday to discuss how to combat a growing extremist threat and counter a wave of military coups and terrorism across the continent.

At a meeting hosted by the African Union on “Terrorism and Unconstitutional Change” in Malabo, the capital of Equatorial Guinea, issues of terrorism in Africa were discussed, with emphasis laid on the conversation of battling and effectively ending its existence.

The meeting was hosted by the president of Angola, President Teodoro Obiang Nguema Mbasogo, while the chairwoman of the African Union Commission, Moussa Faki Mahamat, addressed delegates at Saturday’s inaugural ceremony.

Africa has seen recent coups in Mali, Burkina Faso, and Guinea, as well as military rule in Chad, after gains in establishing democracy. Also, terrorist groups such as the Islamic State, Al Qaida, Al Shabab, and Boko Haram operate throughout several countries, further establishing the need for the fight against terrorism.

Mahamat urged African countries to make greater use of their own troops in battling the continent’s terror threat, reducing their reliance on forces from other continents.

With the Libyan conflict in 2011, African Union Commission chairperson H.E. Moussa Faki Mahamat noted that terrorism rose on the continent. This, according to Mahamat paved the way for foreign mercenaries to arrive in the Sahel, as well as an influx of terrorist groups vanquished in the Middle East.

Since then, terrorism has spread across the continent. Terrorism is spreading from Libya to Mozambique, Mali, the Gulf of Guinea in West Africa, Somalia, the Sahel, the Lake Chad Basin, and the eastern DRC.

However, Africa did not waste any time reacting to the growing threat of terrorism. To counter this, the African Union established joint forces to fight terrorism, such as AMISOM/ATMIS in Somalia, the Joint Multinational Force in the Lake Chad Basin, the G5 Sahel Joint Force, and the SADC mission in Mozambique (SAMIM), and bilateral initiatives in Mozambique.

The Union also reactivated legal instruments to combat terrorism, such as the Plan of Action on the Prevention and Combating of Terrorism adopted in 2002, the operational framework of the OAU convention on Combating Terrorism adopted in 1999 and its Protocol adopted in 2004, the Johannesburg Declaration on the initiative to silence the guns and the AU Roadmap on Practical Measures to Silence the Guns in Africa by 2030.

Terrorist attacks on the African continent increased fourfold between 2012 and 2020, according to the African Union’s African Centre for the Study and Research on Terrorism (ACSRT) in Algiers.

In 2012, there were 508 terrorist attacks across the continent, resulting in 2,563 casualties. In 2020, there were 2,034 attacks, resulting in 8,631 deaths, signifying 400 percent and 237 percent increases in attacks and deaths, respectively. Terrorist attacks frequently affect women, children, and adolescents, both as victims and as perpetrators.

The president also denounced the continent’s history of unconstitutional government changes, which accelerated in 2021 and 2022. He explained that many unconstitutional transitions of government have been manufactured or prompted by external reasons, with the involvement of foreign fighters and mercenaries to defend their political and economic interests, posing threats to the continent’s peace and security.