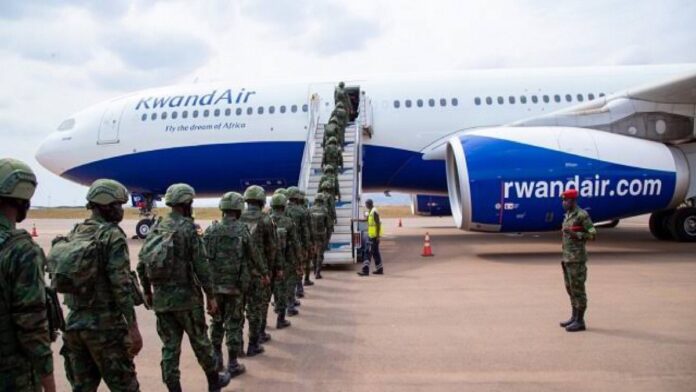 After the authorities of the Democratic Republic of Congo accused Rwanda of helping the M23 rebel group, a decision from the DRC was to stop RwandAir flights, and in doing so, it recently summoned Kigali’s ambassador.

Kinshasa alleged this week that Rwanda was supporting the March 23 movement, which Rwanda denies, as the Congolese army and militia clashed again in the country’s east.

An official from the Democratic Republic of Congo said late Friday that the country would take “conservative measures” against Rwanda, including barring flights from the national carrier.

After an interesting executive meeting of the Superior Defence Council, which was chaired by Congolese President Felix Tshisekedi, the decision was made to suspend RwandAir flights.

“It was agreed to suspend flights from RwandAir to the Democratic Republic of Congo immediately,” Communications Minister Patrick Muyaya stated.

“It was also decided to summon the Rwandan ambassador to notify him of the total disapproval of the Congolese government,” he added.

According to the Congolese government, the Rwandan government is aiding M23 rebels in the country’s east, citing military equipment allegedly discovered, as well as local testimonials and photographs obtained by soldiers.

M23, primarily a Congolese Tutsi group, is one of over 120 armed groups roaming eastern DR Congo, many of which are remnants of regional wars dating back more than two decades.

In late 2012, it briefly took control of Goma, the provincial capital, before the army put down the insurrection the following year.

M23, on the other hand, resumed fighting this year, accusing the Congolese government of violating a 2009 accord that called for its fighters to be integrated into the army.

According to the UN, recent confrontations between the military and M23 rebels in eastern DRC have displaced 72,000 people.

“We can confirm without fear of being contradicted that it is Rwanda that is supporting the M23 for the moment…,” a member of local civil society, Ghislain Bolingo, told reporters.

Rwanda, on the other hand, claims that the violence is limited to the DRC and that they are not involved. The Congolese army and the FDLR, on the other hand, have been accused of shelling Rwandan territory on 19 March and 23 May, claiming that numerous civilians were hurt. It has requested that regional monitors look into the matter.

According to Emmanuel de Merode, director of the Virunga National Park, the Congolese army has now retaken its camp at Rumangabo, although the M23 still controls much of the surrounding territory.

He also told Reuters that severe fighting occurred overnight (25-6 May) near the Rwandan border in Kibumba, a town 20 kilometers northeast of Goma.