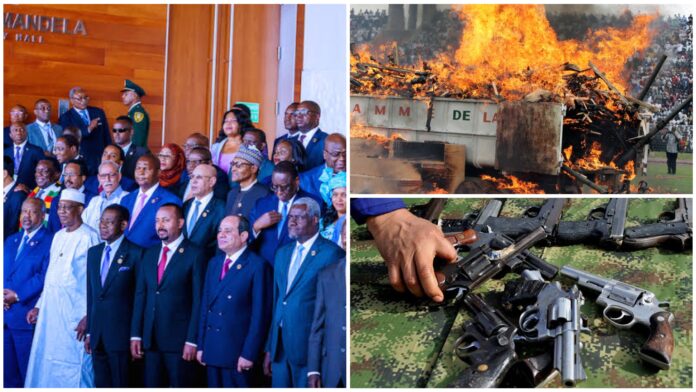 The Peace and Security Council (PSC) of the African Union (AU) opened the African Amnesty Month (AMA) on Monday, 5th of September 2022, in Lomé.

In 2017, the African Union (AU) proclaimed September each year as “African Amnesty Month for the Surrender and Collection of Illegal Small Arms and Light Weapons (SALW)” (SALW) to encourage broad support for efforts to end smuggling.

This year, the United Nations Office for Disarmament Affairs (UNODA) plans to support amnesty activities in Liberia, Tanzania and Togo.

In each country, arms collection and dissemination activities are managed by the Liberia National Small Arms Commission (LiNCSA), the Tanzania National Focal Point Coordinator on Small Arms and Light Arms, and the National Commission for Lutte Contre la Proliferation, lacirculation et from Togo.

In this year’s edition of the event and part of the Silencing Guns in Africa initiative, experts from Council member states will join their efforts to end the circulation of small arms in Africa by 2030.

In particular, the initiative aims to raise awareness and encourage civilians to voluntarily and anonymously surrender their illegal weapons without risking prosecution.

“It also aims to promote Disarmament, Demobilization and Reintegration (DDR) programs as well as encourage the participation of African civil society, including youth and women, non-governmental organizations, faith-based organizations, the private sector and the media,” the organizers said.

The measure “will, among other things, encourage the disposal of illegal firearms by civilians during Africa Amnesty Month,” said PSC President Amma Twum-Amoah.

This is the first time the AMA has been held outside of Addis Ababa, the AU base.

According to the AU, there are still more than 40 million illegal weapons in circulation in Africa, causing more than 500,000 deaths a year.

On the day of the launch of the AMA in Lomé, Togolese authorities destroyed more than 2,000 illegal weapons of various calibers that had been seized in the country.