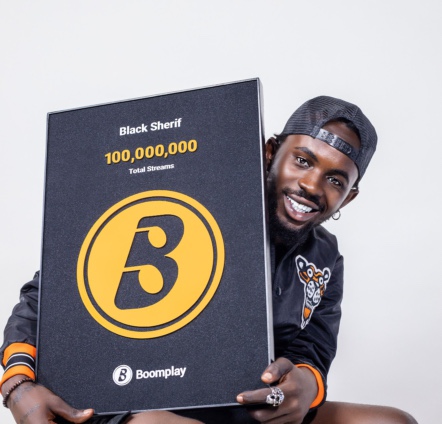 This comes after becoming the first Ghanaian artist to reach the 100 million streams mark on the streaming platform.

Introducing the plaque to Black Sherif, Paul Azumah-Ayitey, Public Relations Manager for Boomplay Ghana said: “Boomplay’s Golden Club is home to artists who have reached and surpassed 100 million streams. We are excited about the journey so far and believe it will inspire other new and future Ghanaian artists to greater heights, with Boomplay by your side as pioneers.”

Upon reaching the milestone, Blacko revealed to his fans that “it’s a big deal for me to reach 100 million streams on Boomplay and to be the first Ghanaian artist to achieve that on the streaming platform”.

“As a young man from Konongo with only one dream and one voice, it made me realize that as long as I believe and dare to do something, I can achieve anything. Thanks for that, Tribe Blacko. Congratulations to the Boomplay team for pulling me in from day one until now.”

The “Kwaku The Traveler” hitmaker will enjoy online and offline promotional support across all of Boomplay’s operating markets, as well as prioritization for his upcoming releases, including his highly anticipated album, as part of Boomplay’s Golden Club member benefits.

Born Mohammed Ismail Sherif, the 20-year-old talented artist released Money, Cry For Me and Destiny in 2020. He later released “Money (Remix)”, “Adea Kye” and “Ankonam” which caused a huge hit on Boomplay in many countries. With the release of “First Sermon” and “Second Sermon” in 2021, Blacko went viral and immediately got the spotlight across Africa.

As a result, Blacko received an appeal from fellow Golden Club member Burna Boy for the remix of “Second Sermon” to give him greater reach across Africa and open the floodgates to accolades from prestigious awards and platforms.

Boomplay’s year under review, which highlights statistics and insights into music consumption and engagement on the Boomplay platform in 2021, saw Blacko emerge as the second most streamed artist of the year in Ghana. His “First Sermon” and “Second Sermon” were the 1st and 2nd most streamed songs of 2021 in Ghana.