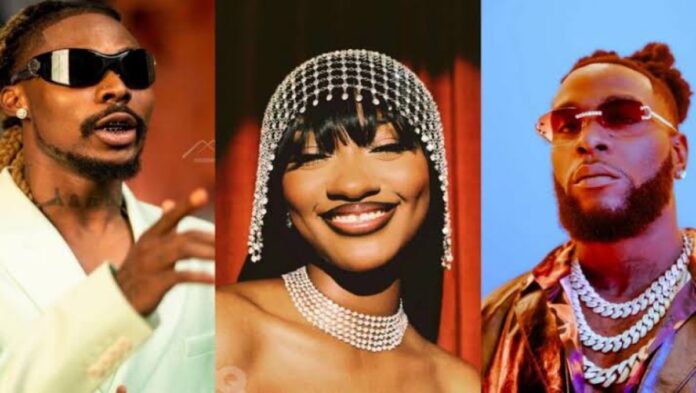 In a list circulating online, Nigerian stars Burna Boy, Tems and Asake are scheduled to perform at this year’s Coachella Music Festival.

From Friday, April 14 to Sunday, April 23, 2023, the Coachella Valley in the Colorado desert will host an annual music and arts festival taking place at the Empire Polo Club in Indio, California.

Online reports and rumors about the festival’s musical artists were already circulating.

It is recalled that Burna Boy caused a great stir in 2019 when his name was revealed in the program, but it was written in lowercase and Coachella, which previously received African artists on its stage, quickly gained prominence in Nigeria with the artist’s request for his name to be written in uppercase.
Also, read; Former Cameroonian Midfielder Modeste MBami has Died

Asake and Tems are joined by Burna Boy, a Ghanaian music sensation and lead singer of the “Kweku The Traveler” hit, Black Sheriff.

The artist above has had an incredible year in 2022 releasing hits and gaining momentum around the world.

Superstars Justin Bieber, Bad Bunny and Frank Ocean were also in the line-up and will headline the days of the festival with musical performances.

Although the show’s organizers have yet to release an official statement confirming or denying the viral post, this will be Burna Boy’s second appearance, while Tems, Asake and Black Sheriff will make their debuts.