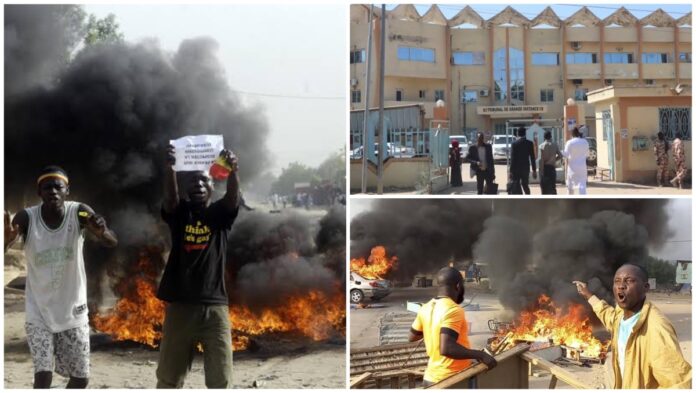 A court in Chad handed prison sentences of between two and three years to more than 260 people arrested after anti-government protests in October, while defense lawyers said the trial was “illegal”.

Last week, 401 people were tried en masse at Koro Toro prison, a high-security prison in the desert 600 kilometers (375 miles) from the capital, N’Djamena.

Attorney General Moussa Wade Jibrin told a news conference on Monday that 262 people had been sentenced to prison, 80 had been suspended and 59 had been acquitted, Agence France-Presse reported.

The trial ended on Friday after four days, state television was the only agency entitled to media coverage, and the verdicts were announced on Monday after the Attorney General’s return to the capital.

The defendants were charged with participation in an unauthorized meeting, property damage, arson and public nuisance.

Around 50 people, including 10 members of the security forces, were killed when police opened fire on protesters in N’Djamena and several other cities on October 20, according to an official figure.

However, opposition groups say the real number is much higher and that unarmed civilians have been the victims of mass killings.

Local and international NGOs, the European Union and the African Union condemned the bloody campaign and the use of violence against civilians.

Chadian lawyers boycotted the trial, calling for an “illegal” in camera transfer for the trial. Many stopped working during and after the trial, with Chad’s Bar Association calling it a “parody of justice” as the accused were “kidnapped” and “deported” to Koro Toro, AFP reports.

The Bar Association announced that it would appeal the court’s decision.

The protests were called to mark the date on which Chad’s ruling military originally vowed to step down from power – a period that has now been extended by two years.

Deby, 38, took power when his father Idriss Deby Itno, who ruled the arid Sahel state for 30 years, died in an anti-rebel operation in April 2021.

Authorities have previously said that 601 people, including 83 minors, were arrested in the N’Djamena region alone and taken to Koro Toro.

Around 80 minors detained there have been returned to N’Djamena, the republic’s attorney general said on Monday, where they remain in custody before being brought before a special juvenile court, according to AFP.