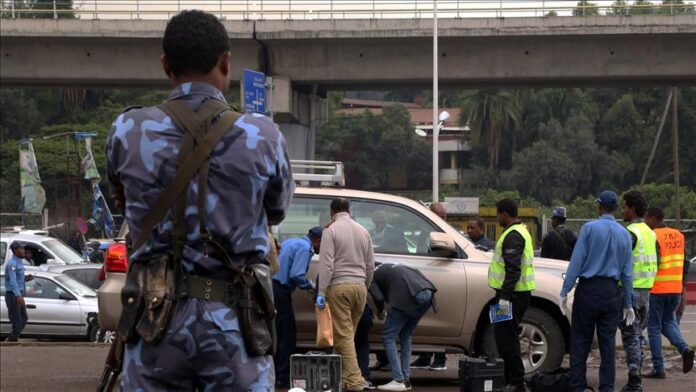 The Ethiopian Human Rights Commission has called for the release of journalists and media employees as arrests within the capital, Addis Ababa, become obvious.

The head of the human rights commission, Daniel Bekele, stated that the continuous arrests of media personalities are “particularly alarming (…) and its repercussions extend beyond the media space and freedom of expression,” Bekele said in a statement Friday.

Several human rights organizations have accused Prime Minister Abiy Ahmed’s government of intimidating the media and harassing opponents in the past as it sought to quiet regional unrest.

According to reports, two journalists were arrested in Ethiopia on Thursday, May 26. As addressed by other media personalities, the arrest on Thursday has raised the total number of journalists jailed in the past week to at least 12 in a wave of arrests that has sparked international concern.

Recall that plainclothes security forces detained Temesgen Desalegn, the editor of the Amharic-language magazine Fitih, at his office in Addis Ababa on Thursday morning, according to his colleague Misgan Zinabu.

Zinabu, who expressed shock as to the necessity of the event and its timeline, claimed that the “plain-clothed security forces” arrested Temesgen before taking him to a local police station.

“The security forces then moved him to a secret location,” he said, adding that his home was also searched and magazines, hard drives, and a camera seized.

In what seems to be a wave of arrests, Yaysewe Shimelis, a journalist and YouTuber, was also arrested at his home in Addis Ababa on Thursday afternoon, according to his former colleague Bekal Alamirew.

“Police have charged him with inciting violence through his profession,” he stated, hinting that the former TV anchor was in court on Friday.

The arrests comes just a week after Nisir International Broadcasting Corporation and Ashara, two YouTube news stations, revealed that their studios in the northern Amhara region had been raided and that several personnel had been arrested.

According to officials, an anti-crime campaign resulted in the arrest of over 4,000 people. However, some media organizations claim that journalists and media outlets are being targeted in Amhara and in other locations within the country.

On the other hand, in the regional capital of Bahir Dar, four of Nisir International Broadcasting Corporation’s personnel (journalists and administrative staff) were arrested and several types of equipment were seized, according to the company, as two more of the company’s journalists are supposedly still missing.

In an arrest that has been said to have sparked international outrage, Solomon Shumye, a TV broadcaster with a YouTube show, was also arrested and charged with inciting violence in Addis Ababa last week, according to his sister Tigist Shumye.

The US State Department expressed concern on Tuesday over Ethiopia’s “shrinking scope for freedom of expression and independent media.”

The “Committee to Protect Journalists and Reporters Without Borders” have demanded that the detained journalists be released immediately and that the authorities cease harassing the media.