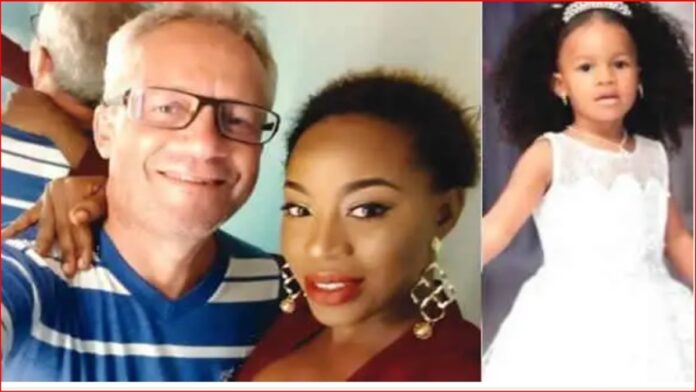 The case of Peter Nielsen, a Danish man, was deliberated upon and judgment was passed at the Lagos high court on Friday, April 20th, 2022.

What was a controversial case involving the death of his Nigerian wife, Zainab, also Known as Alizee and their 3-year-old daughter became viral when Peter was sentenced to death for his crime.

Recall that the Danish man had been accused of killing his singer wife, Zainab, and their three-year-old daughter, Petra.

The 54-year-old is said to have suffocated both victims as their lifeless bodies were found in No. 4, Flat 17, Bella Vista Tower, Banana Island, Ikoyi, Lagos State, at 3.45 a.m.

In a five-hour court case, Justice Bolanle Okikiolu-Ighile, who presided over the case at a Lagos High Court sitting at the Tafawa Balewa Square, noted that evidence brought before the court has in fact proven beyond reasonable doubt that Nielsen indeed “smothered” both his wife and child.

The judge passed her judgment after the evidence provided in court painted the case as one of domestic violence. She maintained that “DNA analysis of nail scrapings brought out the assailant of Zainab.”

This statement proves that while Zainab was being attacked, she fought to defend herself and in her attempts, she managed to get the DNA of her attacker under her nails.

During the trial, the DNA scraping showed that Peter Nielsen killed his wife and daughter, as disclosed by the prosecutors.

“There is evidence before the court that there is a fight between the defendant and his wife,” the judge held.

The prosecuting team was able to bring to the trial witnesses who testified to the very string of events and their timelines, many of which influenced the decision by the court to maintain capital punishment.

Interestingly, one of these witnesses had testified to a fight that broke out before the deafening silence that eventually led to the discovery of Zainab’s lifeless body. According to the Judge, “Witnesses (PW5 and PW6) testified that they heard Zainab calling Mimi (one of the girls living with the couple) for help, and they heard Zainab telling the defendant to check her phone but he kept hitting her head.”

Report from witnesses and conclusions from the judge establishes a pattern of domestic violence one that particularly seemed obvious to those around the couple.

The judge maintained that Peter Nielsen had always been domestically abusive towards his wife as shown in the “police extract from Ikoyi Police Station,” the Judge said. Adding that “She (Zainab) didn’t know that her marriage to the defendant was “void ab initio” because Peter was already married in Denmark.”

The use of “Void ab initio,” by the judge references the fact that the Dane’s marriage to his Nigerian wife is in-fact ”void” and has no legal backing since he had been married in Denmark before he married Zainab.

Despite the evidence brought against him, some more damning than others, the Danish man pleaded not guilty. The troubling interest in proving his innocence brought further evidence to light.

First, post-mortem examinations revealed that Zainab suffered cuts and bruises on her neck and other parts of her body, showing signs of a struggle; she was also injured around her nose and mouth, suggesting that she and her 3-year-old were killed when their noses and mouths were forcibly closed.

Pepe, Zainab’s sister, was found to be a credible witness by the court. She testified about an argument she saw between the pair in 2017, saying the defendant threatened to murder her if she told anybody about it.

Read also; The Cameroonian who moved back to Africa from Europe to start up a Fintech, now worth millions