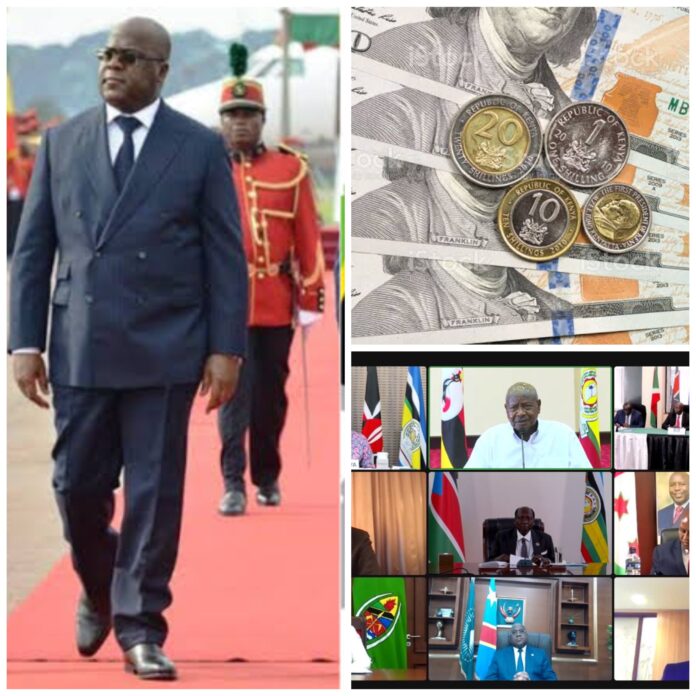 The Democratic Republic of Congo took the final and most important step towards joining the East African Community (EAC) on Monday. The completion of the process immediately created an increase in the GDP of the bloc by billions of dollars.

At an event held on Monday at the EAC headquarters in Arusha, Tanzania, the DRC officially became a member of the EAC after depositing instruments of ratification to accede to the EAC treaty at the bloc’s secretariat.

DRC now has full rights and privileges like any EAC member to participate in EAC programs and activities and is certified to fulfill EAC obligations.

With a population of around 92 million people, it is home to nearly half the population of the EAC member states, making it a massive market.

The accession of the Democratic Republic of Congo foreshadows growth in various sectors and also increases the population to over 300 million.
The combined gross domestic product (GDP) will also increase to $250 billion (Shh 28.8 trillion).

The accession of the DRC should lift restrictions on the free movement of people and goods and increase intra-EAC exports to the DRC, which currently amount to US$7.4 billion.

In presenting the instrument of ratification to the Secretary General of the EAC, the Deputy Prime Minister and Minister of Foreign Affairs of the Democratic Republic of Congo Christophe Lutundula Apala Pen’Apala said that his country’s accession to the EAC is an economic, cultural, geographic and historical commitment.

“The addition of the Democratic Republic of Congo to the bloc is a realization of the vision of the founders of the Organization of African Unity (now the African Union), including Mwalimu Julius Nyerere, Mzee Jomo Kenyatta, Kwame Nkrumah and Patrice Lumumba, who all want a strong continent. united and prosperous, where people can trade and move freely,” said Mr. Apala Pen’Apal.

“Our accession will strengthen the bloc’s economic, political, sociocultural, financial and military strength.”

The deposit of the instruments of ratification with the Secretary General of the EAC is the final step towards the admission of a new member – as stipulated in the East African Community Treaty.

To date, almost half of the trade between the DRC and the EAC has been informal, meaning that the commercial potential has not been optimized.

“The addition of the DRC to the EAC is accompanied by an increase in GDP and expansion of the market size, making the EAC a home for approximately 300 million people, which is mutually beneficial for the people of the EAC and the DRC, providing employment opportunities and investment that come with this new development,” said Dr. Peter Mathuki, Secretary General of the EAC.

“The expanded membership makes the brotherhood larger, with a nearly 50% increase in population, a 22% increase in GDP, and an expanded territory of 79%, stretching from the Indian Ocean to the Atlantic.”

The EAC assumes that with lower tariffs on goods and the lifting of trade restrictions between partner countries, goods, and services will circulate more freely.

“Over the past seven years, the share of EAC exports to the Democratic Republic of Congo averaged 13.5%. But with the RDC now in the EAC, that is likely to change,” said Dr. Mathuki.

“This framework provides ample opportunities for the people of East Africa at large to take advantage of opportunities in trade, agriculture, manufacturing, technology, natural resources, education and other areas of common interest.”

EAC trade with the DRC has been largely informal, and opportunities are hampered by the high costs of doing business due to the prevalence of non-tariff barriers.