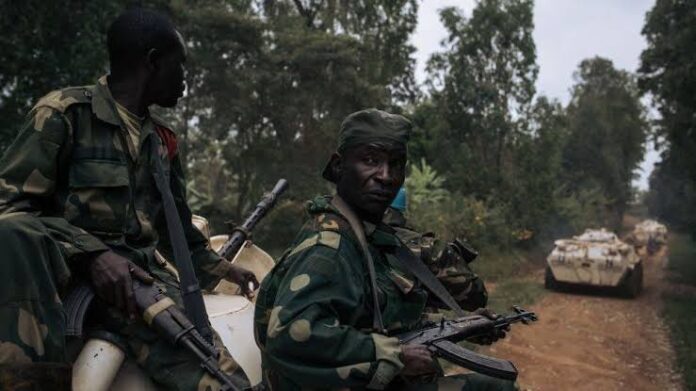 East African leaders have agreed to jointly send troops into the Democratic Republic of Congo to stabilize the country as violence continues to brew.

While in a meeting in Kenya, the leaders of East African nations decided that a quick response to the issues in DRC is advisable and as such, a conclusion to deploy troops into the country was reached.

The growing rate of violence in Congo has since become a reason for concern in the region. While the Democratic Republic of Congo has blamed the attacks by rebels on Rwanda, the government of Rwanda has openly denied its involvement in the supposed sponsorship of rebel attacks.

In response to the accusations that have since led to the deaths of dozens and the closure of a shared border between Rwanda and Congo, seven East African countries that make up the regional bloc have agreed to deploy the “East African Community regional force” to ensure peace returns effectively in Congo.

So far, the northern parts of Congo such as “North Kivu, South Kivu, and Ituri regions” have been dangerously affected by the rebel activity. Dozens have been reported dead, with outcry for prompt response to the violence that has since caused damage in the political structures of these regions.

According to the EAC leaders, the effort to pacify the area, which is home to numerous rebel factions, some local, and others with roots in Uganda and Rwanda, would be led by Kenya.

It has since been discovered that the violence in these regions and the involvement of the rebel group have been due to conflict over territory and the valuable minerals in the area.

Some militants claim they turned to violence to defend their towns from other rebel organizations. This has caused the creation of factions, some claiming to be defenders and others who have been tagged the “aggressors.”

According to Ntanyoma Rukumbuzi, a researcher and political analyst, the EAC force must reassure communities that they will be protected.

“We need to see a military force that protects civilians by ending fighting, forcing combatants to lay down their guns,” he said. “We need a guarantee that a force is filling the vacuum where many of these armed groups have been working to protect their communities.”

According to some sources, Rwanda won’t participate in the deployment as scheduled. While the country has continually refuted the claims that it backs up rebel groups in Congo, Kinshasa of Congo has been relentless in his allegations.