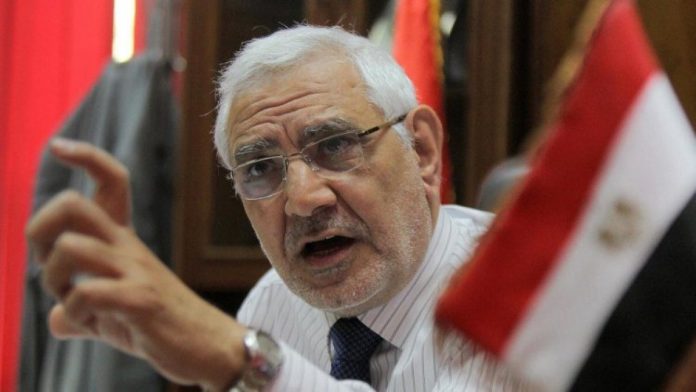 Abdel Moneim Aboul Foutouh, a presidential candidate in 2012, was sentenced to 15 years in jail by an Egyptian emergency court for “false information” and the “undermining of national security.”

According to a judicial source, there were 24 other Islamist opponents in the sentence handed down on Sunday. Among them is Mahmoud Ezzat, the former supreme guide of the Muslim Brotherhood, who was already condemned to life in prison for “espionage,” and Mohammed al-Qassas, the No. 2 or right hand of Mr. Aboul Foutouh’s “Masr Qawiya” party.

Mr. Aboul Foutouh had been detained upon his return from London, where he gave interviews denouncing the administration and pushing for a boycott of the presidential election in which Abdel Fattah al-Sisi was re-elected.

He was, however, a candidate in the election won by the Muslim Brotherhood’s Mohamed Morsi in 2012, which was also deposed a year later by Mr. Al-Sisi, the then army chief.

Mr. Aboul Foutouh was accused of being a member of an “illegal organization” before an anti-terrorism court after being labeled a “terrorist” and having his assets frozen for at least four years now.

According to local media, Foutouh’s lawyer, Khaled Ali, a prominent leftist and also a previous presidential candidate, had opted to defend him with the intention of using Mr. al-Sisi’s weapons of power, weapons which he believes would prove that Foutouh’s words and decisions were in fact for the protection of Egyptian society.

In April, he presented four episodes of a popular military soap opera to the judges as exculpatory evidence, including videos of Mr. Aboul Foutouh, supposedly filmed without his knowledge by intelligence services.

Foutouh’s lawyer, who, as stated, was also a former presidential contender, presented Foutouh as a victim of some planned attempt to destroy him.

Amnesty International – which recently said Egypt held the world record for death sentences with more than 350 in 2021 – denounced the verdict, calling it a “totally unfair political trial.”

Amnesty International stated that the convicts had been subjected to “torture and ill-treatment” in detention and called on Mr. Sisi to release them. Mr. Aboul Foutouh, “aged 70, has been deprived of medical care for years,” the human rights NGO added.

Recall that local media had earlier reported about the arrest of Foutouh in 2018. According to sources, He was arrested in his house by Egyptian security agents on February 14, 2018, only weeks before the March 2018 presidential election, most likely in connection with an interview he gave the month before in which he obliquely criticized President Al Sisi.

The SSSP examined him the next day, through intense interrogation as they accused him of “joining a terrorist group” and “publishing false news to undermine national interests” in Case No. 440 of 2018. He was then imprisoned in Tora “El Mazraa” prison’s solitary pre-trial confinement.

His lawyers were able to visit him a few times during the first two years of his confinement. However, they have not been permitted to visit him since 2020.

The SSSP (Supreme State Security Prosecution) was unable to present evidence to support his continued custody until trial, and now the trial seems to have given a favorable result for the al-Sisi administration.

Also read; Dozens Left Dead Due To Stampede at a Church Charity