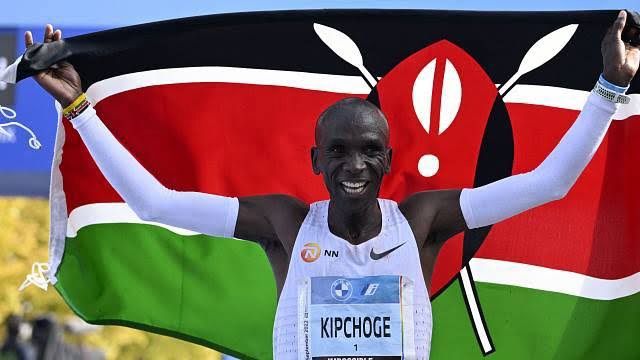 Kenyan Eliud Kipchoge broke his own world record by winning the Berlin Marathon, beating the previous record of 2:01:39 he set in the German capital in 2018 with a time of 2:01:09.

Kipchoge, 37, and a two-time Olympic gold medalist, took his 15th win in 17 career marathons to cement his claim as the best 26.2-mile runner of all time.

Kipchoge slowed down in the final miles, running a 61:18 in the second half, after going out in an unprecedented 59:51 in the first 13.1 miles. While this pace was unprecedented and quite unexpected, he still won by 4:49 over Kenyan Mark Korir.

“I was planning to go through it [at halftime] 60-50, 60-40,” Kipchoge said. “My legs really ran really fast. I thought about trying to run two hours, but overall I’m happy with the performance.

“We were too fast [in the first half]. It drains energy from the muscles. There’s more to my legs [maybe to lower the record again].”

“Today wasn’t my best day, but it was the best thing I could do today,” she said in a text message, according to Race Results Weekly, adding that she stopped briefly and left at the end of the race.

The last eight times the men’s marathon world record was broken took place on the flat streets of Berlin. It all started in 2003, when Kenyan Paul Tergat became the first man to break 2:05.

The world record was 2:02:57 – set by Kenyan Dennis Kimetto in 2014 – until Kipchoge broke it for the first time four years ago.

The following year, Kipchoge became the first person to run 26.2 miles in under two hours, clocking 1:59:40 in an unrecorded showcase and not in a race.

Going forward, Kipchoge is focused on becoming the first runner to win three Olympic marathon titles in Paris in 2024. He also wants to win all six annual World Marathon Majors. He scored four of them, losing only to Boston (April run) and New York (November run).

Kipchoge grew up on a farm in Kapsabet in Kenya’s Rift Valley and often carried gallons of family milk by bicycle to sell at the local market. Raised by a kindergarten teacher, he walked more than three miles to and from school. He saved five months to buy his first pair of running shoes.