Ethiopian Airlines to Own 49% Stake in New Nigeria Air 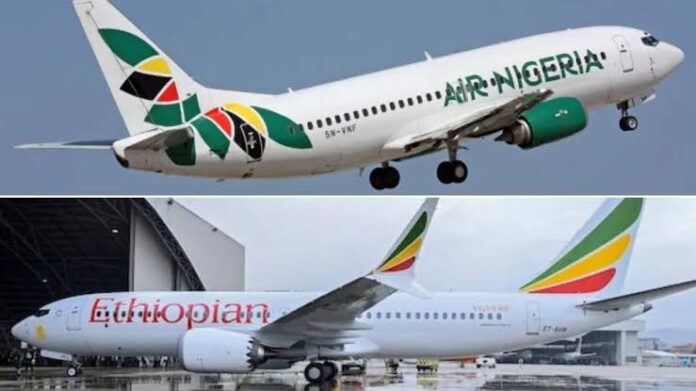 A day earlier, during Nigeria Air’s press conference, the minister announced that plans to launch the country’s new national carrier were being finalized. According to the minister, the airline would start flights from Lagos to Abuja and vice versa.

Ethiopian Airlines will own 49% of the new airline, the Sovereign Fund of Nigeria 46% and the Federal Government of Nigeria the remaining 5%.

“Nigeria Air is a limited liability company that will not have government interference,” said Hadi Sirika.

The federal government spent less than budgeted for the project, the minister said. He also said that Ethiopian Airlines won the bid for the airline by meeting the bid evaluation criteria and the deadline.

According to a statement released by Nigeria Air Limited, Nigeria Air will operate three Boeing 737-800s in a configuration very suitable for the Nigerian market. It was also announced that the airline would be owned by a consortium of Nigerian private investors.

The airline has already started the process of recruiting captains and crew. According to the Minister of Aviation, Nigeria Air will have seed capital of US$300 million and 30 aircraft within four years.

Nigeria Air will not be Ethiopian Airlines’ first domestic airline in Africa. Ethiopia also has stakes in airlines from other countries, including 45% in Zambia Airways, 49% in Guinea Airways, 100% in Ethiopia-Mozambique Airlines, 49% in Chad Airlines and 49% in Air Malawi.