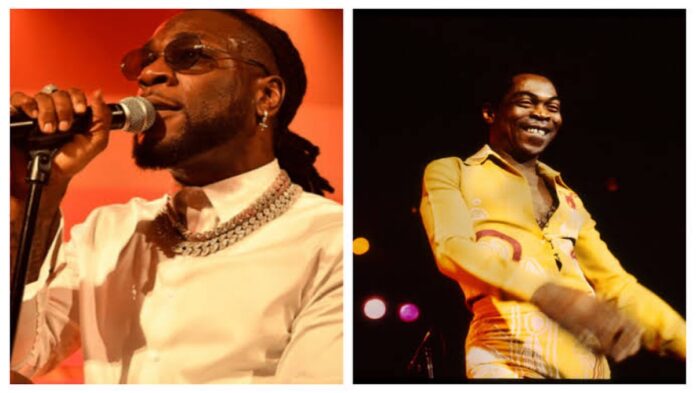 Fela Kuti, the late Afrobeat legend, and Burna Boy, an Afrofusion singer, were included in Rolling Stone’s list of the “200 Greatest Musicians of All Time”.

On Sunday, the music publisher released the list of 200 singers who, according to their own statements, are among the greatest of all time.

The publishers stated that singers were judged on originality, influence, depth of catalog and breadth of their musical heritage.

The Rolling Stones called the singer, Burna Boy an “African giant” and an “ambassador for Afrobeat as a global movement”.

The magazine wrote, “[he] is an ambassador for Afrobeats as a global movement that can feel equally at home climbing the European charts and maintaining a tender emotional connection to pre-African genres.”

“Burna’s voice is caramel-sweet, but it can also soar on masterfully produced tracks like mega-hit ‘Last Last’ or 2019 gem ‘Anybody’, bolstered by deep bass accents and insanely complex polyrhythms.

“His vocal lines of his find inspiration in everything from hip hop and R&B to pop hockey and dancehall. The world is his playground.”

Of Fela Kuti, the statement reads: “Fella Kuti’s iconic songs from the 70s and 80s are sweeping orchestral instruments, an inventive maelstrom of African highlife, American soul and jazz.

Through his music, he shared an anti-colonial and anti-African outlook and challenged Nigeria’s corrupt military government, which routinely inflicted tremendous harm on him and those around him.

But it wasn’t just Villa’s lyrical rebelliousness that made him so important – it was the way his voice conveyed his vision, his way of singing, his authoritative and direct tone, clear and determined.

Fela’s strict but talkative melodies made his movements easier.

In 1986 he released the smash hit, “Teacher Don’t Teach Me Bullshit”, in which he addresses white education and failed governments, he says, “I say I sing, I ask you all to join my song.”