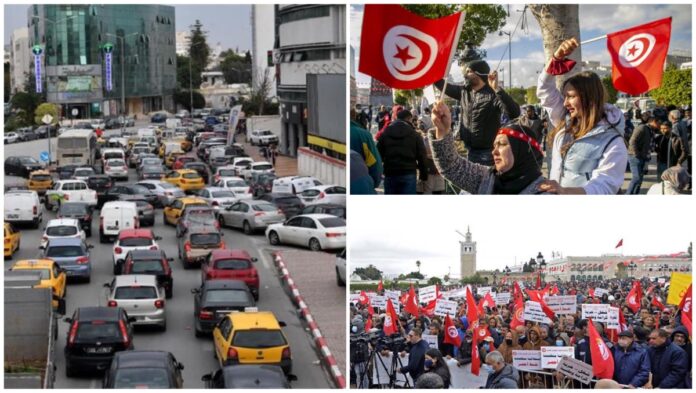 Tram and bus workers in the Tunisian capital went on strike on Monday over back pay and a lack of year-end bonuses, causing traffic jams across Tunisia.

The strike is the latest in a series of similar measures as Tunisia grapples with an economic crisis that has led to frequent shortages of basic products such as gasoline and cooking oil.

The North African country owes more than 100% of its gross domestic product and is negotiating a nearly $2 billion bailout with the International Monetary Fund.

Workers of the state transport company Transtu took to the streets and hundreds demonstrated outside the prime minister’s office, following an appeal by the transport department of the powerful trade union confederation.

Transtu said the strike had suspended “most” transport services in the capital, which has around three million inhabitants.

The Ministry of Transport said: “The random strike has paralyzed transport in the Tunis metropolitan area…it has harmed the functioning of public services and the interests of citizens.”

He said Transtu’s salaries were paid by December 29 and “the real reason for the strikes was other financial demands in the form of an annual bonus” from more than 7,000 employees worth more than $5 million.

He said the bounty would be paid and that “all involved would be coordinated to avoid further disruption”.

Transtu, which operates about 250 bus lines and 15 tram lines, was also paralyzed by strike during the November school holidays, peak time for families using public transport.

The IMF called for the implementation of a series of politically sensitive measures, including the phasing out of staple food subsidies and the restructuring of public companies. This includes Transit as well as the water, energy, and grain monopolies.

The birthplace of the Arab Spring has also been mired in political divisions since President Kais Saied staged a dramatic power grab in July 2021.