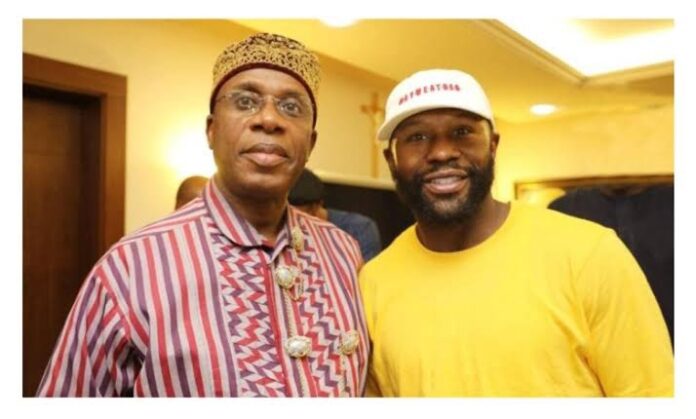 Famous boxing legend and international boxing champion, Floyd Mayweather, has revealed his plans to establish a boxing academy in Africa. The famous boxer revealed this while discussing his intentions for the African continent, an attempt that he believes would help harness and unlock hidden talents across nations on the continent.

While on a visit to Nigeria, Mayweather met with the current minister for transportation, Chibuike Rotimi Amaechi, with whom he expressed his desire to set up academies across Africa to harness the boxing talents of several young people in Africa.

The boxer claimed that the sports world in the United States of America is currently being dominated by Africa, which could only mean that there are several hidden talents on the continent, many of which he believes he could help showcase to the world.

The boxer added that African talents, numerous as they are, do not want to be hidden. Using himself as a reference point, Mayweather described how his decision not to hide his talents had helped him and as such, he would want many young Africans to benefit from his academies which would help them become like him or even better.

“The ultimate plan is to find the next Mayweather. I want to work with kids, I will come over to meet and talk to make sure we are all on the same page, and slowly start building these fighters,” Mayweather said.

The goal to “give back” to the content was a key component in his remark. “All we want to do is aid.” It’s all about giving back and assisting the youth and the next generation,” he explained.

The boxer promised to get world-class coaches on board to assist find talents at a young age and groom them into world-class boxers, according to the plan as communicated to the media.