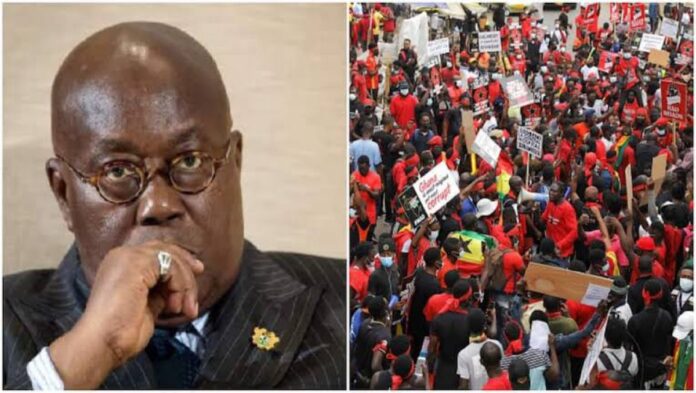 Hundreds of Ghanaians took to the streets in the capital Accra on Saturday (November 5) to demand the resignation of President Nana Akufo-Addo amid record inflation and the government’s response to the economic crisis.

After supposedly failing in his promise to help Ghana, President Akufo-Addo last week urged Ghanaians to support his decision to apply for a loan from the International Monetary Fund.

The economic crisis affects people in all walks of life. Anita Asamoah, a nurse, participated in the protest.

“There is a conflict of interest in the way our president governs with his cousin,” she said. “When they borrow, nine percent of the money goes to their private banking business, which is very wrong.

“We just want them to resign. It’s not about fighting or we just want to scream in the street for nothing. He should walk away until peace comes and allow someone else to come and do it.”

The main coordinator of the Kume Preko Reloaded movement, which organized the protest, Martin Luther Kpebu, added: “For every lord and dollar we lend, the President’s family benefits from the database advising and helping to sell government security. here we are to tell the president to step down. No more nepotism, no more nepotism, no more corruption”.

Ghana is applying for a $3 billion loan from the International Monetary Fund to stem a record 37% inflation and the collapse of its currency, the Cedi.

Most of the protesters wore red T-shirts with the slogan “You can kill me too”.

Student Carlos Adams said that everyone is suffering from the economic situation.

“Our education system has gone astray. Our economy is in trouble. You can’t buy a gallon of gasoline. You can’t buy a bag of corn, so three full meals are now a problem. Survival of the fittest, and that’s not what we voted for.”

The president’s attempt to seek help from the International Monetary Fund has sparked fears that the government will impose austerity measures that will increase the burden on a population already suffering from high prices.

In mid-October, shopkeepers in Accra closed their doors to protest the rising cost of living.