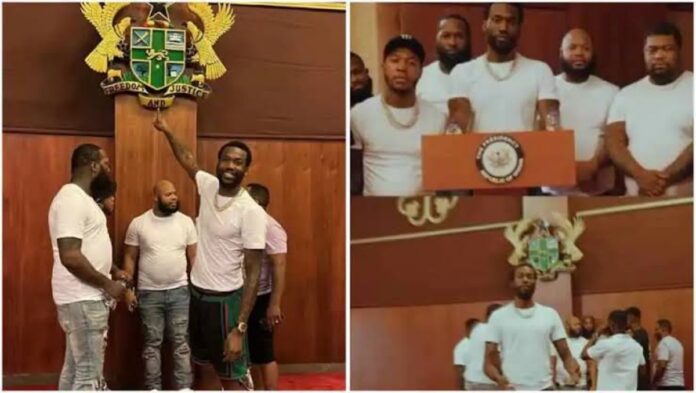 American rapper Meek Mill is currently trending on social media after releasing a teaser for his yet-to-be-released music video, which showed scenes of him in various locations within Ghana’s State House.

The rapper on Sunday, January 8, 2023, posted a video on Instagram announcing that he was about to release a new song, local media reported.

In the short video, Meek Mill appears in various locations in Ghana’s Presidential state house known as the Jubilee House, from the facade through the main hallways, in the main conference room – at a point behind the President’s podium.

Meek Mill was in Ghana in December to perform at the Afro Nation Gala, which just ended over the Christmas break.

However, it seems that Ghanaians are not satisfied with the location of his video recording, as many have criticized the president and the rapper on Twitter.

After the uproar on social networks, the philanthropist would have deleted the controversial video.

Some of the highlights of his time in Ghana included a grueling bike ride, claims his phone was stolen at an event, and battling villains before taking the stage to perform and meeting the boss at Jubilee House.