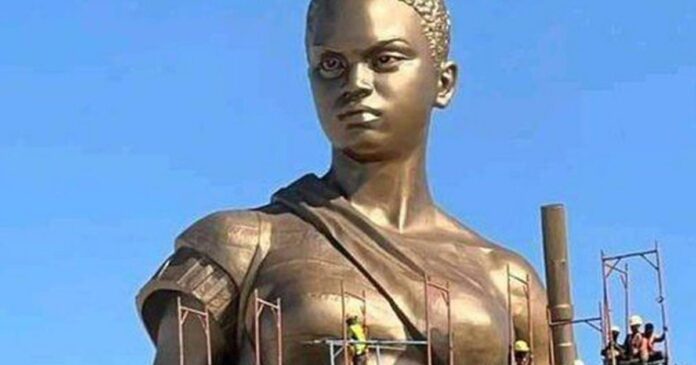 The Benin Republic, formerly known as Dahomey, has recently erected a gigantic statue in honor of one of its greatest historical figures, Tassi Hangbé. The statue was erected to serve as a monument to Tassi Hangbé for her bravery in leading the famous all-female military regiment of the Kingdom of Dahomey, which existed until 1904.

The statue was specifically chosen by the Benin Republic to stand as a historical monument that would also serve as a tourist attraction.

Made of bronze, the gigantic statue is said to have an overall height of 30 meters. Interestingly, its presence is expected to now characterize the Benin Republic nationally, regionally, and internationally.

Queen Tassi Hangbé was famously known for her bravery and military expertise. She was the only woman to have reigned as Queen of Dahomey in the 18th century, using her combat skills and mastery of several traditional weapons to her advantage. Unfortunately, many have noted her to be less well-known when compared to her counterparts in other nations or continents.

Twin sister of King Akaba, Queen Hangbé took the throne right after the death of her brother and reigned from 1708 to 1711. The history behind her time as ruler is perhaps one mixed with trickery and bravery. According to a recount version of how she became a ruler, on the eve of an intense battle, Tassi Hangbé took the place of her deceased brother, dressing herself up in his military outfit.

While she passed as her brother, she also became fiercely known as victorious on the battlefield. This immediately made her favored among her tribesmen and eventually earned her the throne.

Queen Hangbé was known for her bravery but was also respected for her leadership. She worked to build an army of trained women, skilled in the art of combat, enough to defeat the greatest armies in the region. She also created a group of women trained in “trades and skills” that had earlier been noted to be solely for men.

Although her reign wasn’t exactly long, she created a legacy that lives on even to this day.

Share
Facebook
Twitter
Pinterest
WhatsApp
Previous article
Danish Man Sentenced to Death For Killing Nigerian Wife and Daughter
Next article
The Cameroonian who moved back to Africa from Europe to start up a Fintech, now worth millions