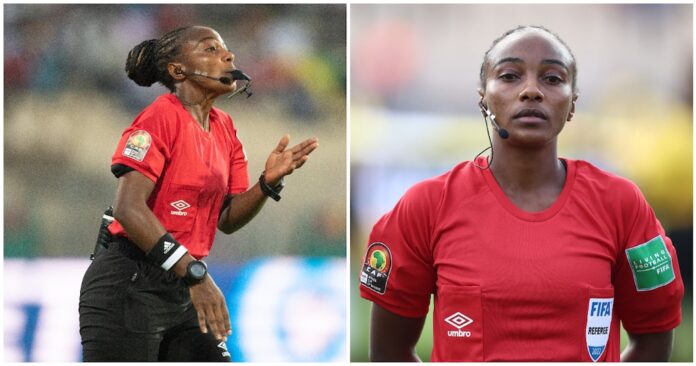 Salima Mukansanga, a Rwandan female referee is set to join two other female referees in officiating in the FIFA men’s World Cup in Qatar later this year.

According to reports, this will be the first time in World Cup’s history that such a thing will happen. BBC reported that the two other referees who will be joining her are France‘s Stephanie Frappart and Japan’s Yoshimi Yamashita.

Recall that Salima Mukansanga made history earlier at the Africa Cup of Nations when she became the first woman to officiate a match at the tournament.

Since 2018, she has refereed numerous matches in Rwanda, while also officiating at AFCON, an undoubtedly great moment for her career.

Mukansanga’s career has been a beautiful one. The Rwandan referee worked as a match director at the Africa Women’s Cup of Nations. She also worked in the same capacity at the CAF Women’s Champions League and the Women’s World Cup. Beyond these, she served as a referee for women’s football at the 2020 Tokyo Olympics.

A total of 36 referees have been chosen to officiate matches at the FIFA men’s World Cup in Qatar. 69 assistant referees and 24 video match officials will assist them.

According to Pierluigi Collina, the chairman of FIFA’s referees’ committee, every official selected was selected using strict criteria. He stated that all officials represent “the highest level of refereeing worldwide.”

Collina added that the process of selection began years ago, first with the deployment of female referees at FIFA men’s junior and senior tournaments.

“In this way, we clearly emphasize it is quality that counts for us and not gender,” Collina stated.

Collina further declared his hope for the future, stating that he hopes that more “elite” women will be selected to officiate “important men’s competitions.”