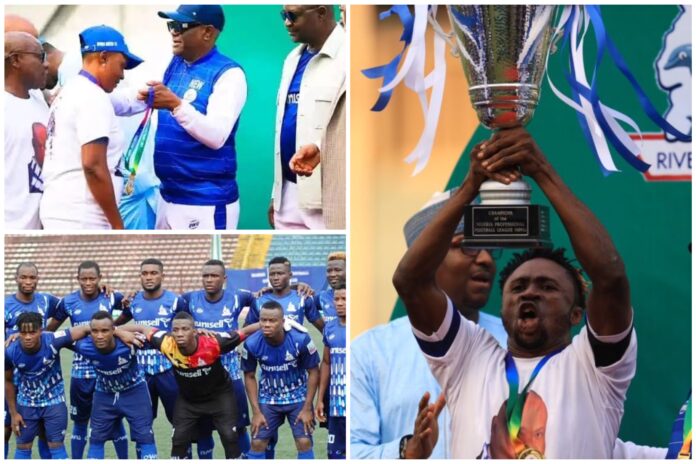 Wike paid tribute to the team’s sacrifice, determination and hard work during the 2021/22 season during a reception at Government House in Port Harcourt on Thursday.

This was included in a statement by Kelvin Ebiri, the governor’s media adviser.

“You did a terrific job, and let me tell you that if you qualify for the group stage of this CAF (Confederation of African Football) championship, we will double for you,” the governor explained in a statement.

Meanwhile, the state sports commissioner, Chris Green has been instructed to organize a two-week training session for Rivers United in Madrid.

The governor stated that the government and people of Rivers are delighted that the club has won the coveted NPFL trophy.

Wike further explained that he isn’t surprised at the victory of the team, as they have always shown devotion and hard work in the past. He noted that “God often helps those who put in the effort,” and as such, their victory comes with no surprise.

The governor also urged players to prepare for the CAF Champions League next season.

The governor admonished the team, tasking them with more victory ahead, especially as he hopes that their vacation and gift would help put them in a good psychological state to grow further, into defeating known west African teams.

“You have to be prepared to get something. And that’s why we as a government have to do everything humanly possible to encourage it,” he said.

Rivers State Sports Commissioner Chris Green stated that Rivers United not only won the league season in style, but also broke all records.

Green, who attributed the team’s victory to the governor’s immense support, said the club has the league’s first and third goalscorers, the best coach, and the best goalkeeper.

In buttressing his point, Green noted that the team has, in recent statistics, conceded the fewest goals in the league. “Rivers United have won the most of their games away from Port Harcourt,” Green said.

“All of this was accomplished by coach Stanley Eguma, those golden guys, and their leadership. We want you to know, Your Excellency, that this is just the beginning. The best is yet to come for us,” Green explained.