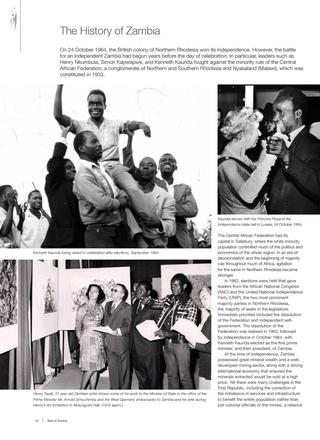 The capital of Zambia is Lusaka. Most of Zambia’s population is concentrated around Lusaka in the south and Copperbelt Province in the north. These are the places where any important business happens in Zambia. The Khasian people originally inhabited the country of Zambia. This changed in the thirteenth century. The British colonized the region in the nineteenth century. British controlled North and South Rhodesia became Northern Rhodesia in 1911 after being merged.

During the colonial era, Zambia was ruled by a London-appointed administration under the advice of the British South Africa Company.

Zambia is a small country when you compare it to other African countries.

The African country is working on an economic diversification program to reduce Zambia’s reliance on copper.

Other sources can be harnessed by promoting agriculture, tourism, gemstone mining and hydropower. Zambia signed 12 documents with Turkey’s Erdogan in Lusaka to improve trade, investment in tourism and diplomacy.

Agriculture is one of the strongest opportunities that are providing more jobs than the mining industry for its citizens. As of 2004, white Zimbabweans started farming tobacco, wheat and chilli pepper. Their skills liberated many Zimbabwean citizens.

In 2004, Zambia exported more corn than it imported. In 2019, the Zambian government legalizes cannabis for medicinal and export purposes.

In Zambia, the President is the head of state and head of government. They operate a pluriform multi-party. The government exercises executive power while both government and parliament share legislative power.

Although they became a republic in the year of their Independence in October, their political structure has been unstable. There were many allegations of fraud and the body governing rejected the allegations from the opposing party.

British and South African immigrants and some white Zambian citizens reside in Lusaka and in Copperbelt in northern Zambia. They are employed as miners and in financial and related activities. Many of them are related. In 1964, there were only 70,000 Europeans in Zambia but today many have left the country.

Zambia has a small Asian population made of Indians and Chinese. This small group controls the economy and the manufacturing sector.

In spite of the fact that many black Zimbabweans are not very influential, these actions help grow the economy of Zambia, something other African countries cannot boast of.

There is a minority of coloured of mixed race in Zambia.

It started during colonialism when segregation separated the coloured, the blacks, and the white from meeting in public places. They could not meet in schools, hospitals or live in the same housing.

Due to the importation of labour by the Zambia government, there has been an increase in interracial relationships. Coloureds are not recorded on the census and many consider them a minority in Zambia. The U.S. Committee for Refugees and Immigrants report that Zambia has a population of refugees and asylum seekers who number 88,900. Most of the refugees are from the Democratic Republic of Congo, Angola, Zimbabwe and Rwanda. Zambians generally welcome foreigners.

In May 2008, the number of Zimbabweans in Zambia increased because they were fleeing xenophobic violence in the violent areas of South Africa.

More than 60,000 refugees live in camps in Zambia and 50,000 of them are mixed in with the locals. Refugees need permits to work in Zambia. The cost of the permit can be as high as $500 yearly.

Honest realities that are unavoidable. Overall, Zambia is a nation with the potential for greatness.

The Zambezi basin has a number of major rivers that flow solely or partly through Zambia. It is called Kabompo, Lungwebungu, Kafue, Luangwa and the Zambezi. They flow through the country in the West and then form a southern border with Namibia, Botswana and Zimbabwe. Zambia is the source of the lake. Kafue and Luangwa form a confluence with the Zambezi at the Chirundu and Luangwa town.

The Zambezi is so beautiful and falls about 100 meters. It falls over the 1.6 kilometres wide Victoria Falls. It is located in the South-West corner of the country and flows into Lake Kariba.

The Zambezi valley is deep and wide and forms a rift valley.

Victoria Falls was made a UNESCO World Heritage Site.

Eastern Zambia, its plateau extends between the Zambezi and Lake Tanganyika. It is a valley that is tilted upwards. The plateau areas of northern Zambia is categorized by the World Wildlife Fund as a large section of the Central Zambezian miombo woodlands Ecoregion.

There is great diversity in Eastern Zambia. Luangwa Valley splits the plateau in a curve north-east to south-west. It extends west to the heart of the peak of the deep valley of Lunsemfwa River.

There are hills and mountains on some sections of the value. The Muchinga Mountains is the watershed between the Zambezi and Congo drainage basins. They run parallel to the deep valley of the Luangwa River and form a sharp drop on the northern edge. The highest Mumpu peak is at the western end and is the highest point in Zambia. The border of the Congo Pelicle was marked around this mountain.

The southernmost headstream of the Congo River rises in Zambia and flows west through the north. After the Bangweulu Swamps as the Luapula, which forms a part of the Democratic Republic of Congo’s border, flows west. Then it changes direction to the north until it enters Lake Mweru.

The Lake’s other major arm is the Kalungwishi River. It flows from the east. The Luvua River drains Lake Mweru. This flows out of the northern end to the Lualaba River, which is the Upper Congo River.

Lake Tanganyika is the other major hydrographic feature attached to the Congo Basin. The Kalambo River receives water from its southeastern end. The Kalambo Falls is Africa’s second-highest uninterrupted waterfall.