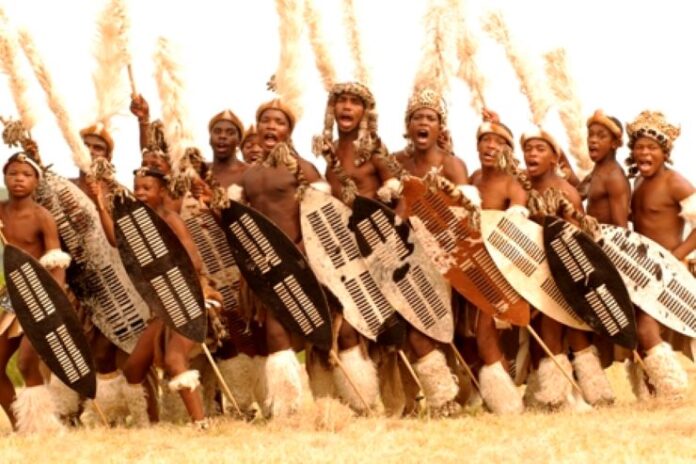 In 1879, Britain and the Zulus engaged in a battle dubbed Anglo-Zulu War. The conflict had complicated beginnings and is remembered for a number of exceptionally violent conflicts as well as for being a significant point in the history of colonialism in the area.

The conflict also marked the end of the Zulu nation’s independence. The Zulus, armed only with spears, defeated a British force of 1,500 well-equipped soldiers on January 22, 1879, handing the British their worst defeat in colonial history.

Research also states that the Anglo-Zulu war is probably one of the strangest and probably toughest periods in Victorian history.

The fall of the Zulu kingdom

Although many people are aware of the battle of Rorkes Drift, which was made famous by the movie “Zulu,” starring Stanley Baker and Michael Caine, they are less familiar with the battle of Isandlwana.

The 1870s saw the hard-won security that many African cultures had attained being destroyed by colonial and settler efforts to place Blacks under strict political authority.

This arose from changes in economic conditions in South Africa’s hinterland and the ensuing necessity to establish sufficient political control over Africans in order to guarantee security and labor access.

One of these societies, the Zulu kingdom, made an effort to fight the expansion of colonial power over them.

Border conflicts between the Boers and the Zulu leader Cetshwayo in the Transvaal territory served as the basis for the Anglo-Zulu war.

Sir Henry Bartle Frere added an ultimatum to the commission conference held in July 1878, much to the astonishment of the Zulu representatives, who thereafter relayed it to Cetshwayo, following a commission investigation into the border dispute that concluded in favor of the Zulu kingdom.

By the end of the year, Cetshwayo had not responded, so Bartle Frere extended the deadline to January 11th, 1879.

The invasion took place circa January 11, 1879. At Rorke’s Drift, an old Irish trading post that had been transformed into a mission station, Chelmsford crossed the Buffalo River in charge of 4,700 men, including 1,900 White troops and 2,400 African auxiliaries.

They proceeded to Rorke’s Drift and started crossing the Buffalo River into Zululand. Ulundi, the royal capital, was the target of three columns that were to attack Zululand.

The first offensive of the Anglo-Zulu war was launched on January 12th, 1879, when Sihayo’s kraal, which is located in the Batshe valley, threatened the British column’s ability to advance.

To attack a precipitous valley into which Sihayo’s soldiers had fled, the invading force crossed the Batshe under Chelmsford’s instructions, pushing their cattle in front of them.

When confronted by the Zulus, some of whom were armed with guns exhibited hesitation. Stones were also rolled down onto the invaders in an effort to stop the attack, and after swift action, the Zulus retreated with about 30 dead and 4 wounded.

The Battle of Isandlwana

Circa January 17th, the primary Zulu army departed Nodwengu in order to protect Zululand from the center column.

Meanwhile, Cetshwayo promised his troops that the British would be defeated in “one day,”.

The men from Chelmsford arrived on January 20 and established a camp at Isandlwana hill. Local opposition was engaged by Chelmsford, who mistook it for the main Zulu force.

This split his column in half, with the other half being used to support an engagement fifteen kilometers distant.

Colonel Henry Pulleine, who was left in charge of the surviving forces, decided against organizing his men into a defensive circle formation known as a “laager” because the wagons would soon be required to convey supplies.

The following day, a detachment led by Colonel A.W. Durnford came to reinforce the camp and assume command.

Durnford, who was characterized as “as valiant as a lion but as foolish as a child,” rashly chased a Zulu foraging party.

To his surprise, he came upon the Zulu army, a mass of 20,000 strong, when he crossed the Mabaso heights range.

Since it was a new moon and fighting on a “black day” was frowned upon, the Zulu had no intention of attacking at that time.

However, they were discovered and they had no choice but to attack. Instead of concentrating his forces in a close formation, Pulleine was forced to disperse his weaponry across a wide area.

In the horn formation, the Zulu made steady progress facing Pulleine’s left flank. They took significant losses as the British focused their fire on the chest, temporarily halting the onslaught.

Pulleine attempted to flee after realizing he was being cornered in order to save the endangered camp.

As a result, the Zulu’s center was able to advance once more. They positioned themselves between the British camp and their fleeing army while yelling the national anthem, “uSuthu.”

There was hand-to-hand fighting, and the Zulu won. The majority of the British troops escaped to Rorke’s Drift or down the Mzinyathi River while the Zulu pursued them.

A third of Chelmsford’s men—52 officers, 727 white troops, and 471 black members of the Native Contingent—were lost during the battle.

The Zulu “took no captives at Isandlwana, as was their custom, and spared no lives, despite cries for mercy.” Everything else that was left behind was taken as loot.

The Rorke’s Drift Battle and Its Repercussions

The following day, a depot at Rorke’s Drift was attacked against Cetshwayo’s orders, who preferred a defensive tactic.

Zulu reserve forces that were not present during the previous day’s fight in retaliation for their resounding success over the British at Isandlwana attacked the “hurriedly built fort”.

The Zulu troop, led by Prince Dabulamanzi, lost 500 losses in this pointless combat in which the British used “rifle fire and bayonets.”

The British were given “much-needed propaganda to counter the Zulu success at Isandlwana” as a result of this.

The right column on the coast overcame Zulu resistance at the Nyezane River before moving in to take control of the abandoned mission site at Eshowe.

Heavy combat took place between the left column and the Hlobane mountain. However, the left and right flanking columns were left exposed when the centre British collapsed at Isandlwana.

Colonel C.K. Pearson’s right column was successfully cut off from the frontier by the Zulus, and his soldiers were surrounded at Eshowe for three months. However, the left flank column managed to operate as usual.

Chelmsford quickly returned to Natal. However, the Zulu people themselves endured tremendous losses, and it got worse.

British pride needed to be rebuilt following the defeat at Isandlwana, thus reinforcements were requested.

The Zulu were severely defeated by Chelmsford’s army as it marched once more into Zululand in April, relieving Pearson’s column at Gingindlovu and taking Khambula.

The Battle of Ulundi, which took place in July, saw Chelmsford advance on Ndini and achieve a resounding military victory.

Cetshwayo was forced to leave for protection after more than 1000 Zulu were slaughtered, and in August he was apprehended in the Ngome forest and banished to the Cape.

The Zulu were then told to go back to their farms and carry on their productive work. However, the British made a point of explaining that the conflict was against the Zulu royal family.

The Division of Zulu Kingdom

It is important to note that the Zulu kingdom had not been destroyed by the Anglo-Zulu war itself, however, it was divided by other events that divided and weakened their sense of economic and social unity.

They were supposed to stand in for the main dynasties of pre-Shakan times, although it was at best a tenuous claim given that one of them was John Dunn, who had sided with the British when hostilities started.

Others had either exhibited poor devotion to Cetshwayo during the conflict or had been openly hostile to him.

As a result of the chiefs’ loyalty to those who had selected them, Britain started to dominate Zululand indirectly. Shepstone’s views were fervently backed by Melmoth Osborn, who was named British Resident in Zululand.

Unsurprisingly, this system led to civil unrest in Zulu Kingdom. The uSuthu, led by Cetshwayo’s brother Ndabuko kaMpande, were those who adhered to the previous Zulu order.

Cetshwayo was reinstated as king at the beginning of 1883, although his authority had been greatly curtailed.

He was confined to a smaller space, surrounded by adversaries, and a Resident was always keeping an eye on him.

uSuthu supporters who lived in Zibhebhu’s region to the north were compelled to move back to Cetshwayo’s realm by Zibhebhu, a fierce rival of Cetshwayo whose allegiance was more to the colonial order than the royal house.

The uSuthu’s attempt to prevent Zibhebhu from attacking was futile. Later, Zibhebhu, another of the leaders, attacked the uSuthu.

At his newly constructed capital of oNdini, Cetshwayo was defeated in 1883, with more bloodshed than the Zulus had ever experienced.

Cetshwayo’s death in late 1883 marked a significant shift in Zululand’s political landscape in favour of the imperial government and those who supported it.

Cetshwayo’s son, Dinuzulu, signed a deal with the Transvaal in an effort to retake control. The alliance was effective militarily, driving Zibhebhu’s army from the land of the loyalists.

However, this deal was extremely expensive. The Boers were promised substantial amount of land on Zululand’s western border, which they termed The New Republic, with its “capital” at Vryheid, in exchange for their aid.

The uSuthu refused when the Transvaalers attempted to claim even more land than what was agreed upon.

The British took action when they realised the extent of the chaos in Zululand. While the Boers were regarded as the true owners of the New Republic, Dinuzulu was permitted to retain sovereignty over his piece of central Zululand.

As a result, a Reserve area was designated for people who were against the loyalists. It seemed nearly inevitable that Zululand would be annexed to the crown in 1887 as pressure for its annexation increased in Natal.

Once more, the uSuthu launched an annexation resistance, and Zibhebhus services were required. The uSuthu led by Dinuzulu made excellent use of the rugged terrain to repel a police unit dispatched to arrest their leaders, making the revolt shockingly successful for a brief while.

Dinuzulu attacked Zibhebhus supporters, forcing them to evacuate the Ndwandwe district quickly. When reinforcements finally showed up and the uSuthu were driven from their hiding places, Dinuzulu was forced to give up.

He and his top supporters were prosecuted for treason in 1889, convicted, and sentenced to jail on the island of St. Helena.

Dinuzulu was granted amnesty and permitted to return to Zululand in 1894, but only as a menial induna, or state official, with no chiefly rights or advantages.

His homecoming was timed to coincide with Natal’s 1897 annexation of Zululand in an effort to placate colonial interests.

In conclusion, many Zulu males were dragged into the Witwatersrand labor market to make ends meet and pay taxes because they were already under pressure from the hut tax.

Zulu society underwent major social divisions as a result of the progressive establishment of a permanent working class and a traditional economy centered on domestic production and cattle husbandry.