The Life and Death of Cetshwayo 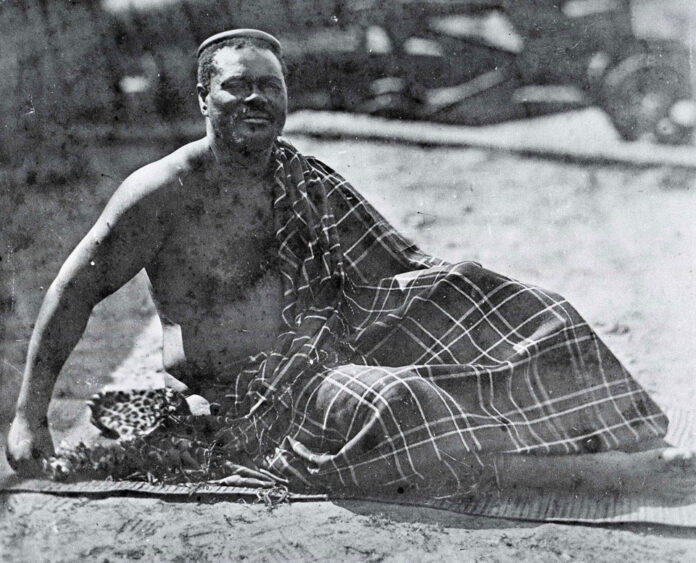 Cetshwayo, also spelled Cetewayo, was born in 1826 close to Eshowe, Zululand, which is today in South Africa. He passed away on February 8 in Eshowe.

His strong military leadership and political savvy helped to restore the authority and dignity of the Zulu country, which had collapsed under the rule of his father, Mpande, during his time as the last great king of the independent Zulus (reigned 1872–79).

Cetshwayo was regarded as a threat to British colonial interests since he was the absolute ruler of a 40,000-man army that was highly disciplined, but that threat was eliminated by the Anglo-Zulu War (1879) and the subsequent collapse of Zulu sovereignty.

Anglo-Zulu War, commonly referred to as Zulu War, was a decisive six-month conflict in Southern Africa in 1879 that saw the British defeat the Zulus.

Also read: King Ezana of the Ancient Kingdom of Axum

The British were interested in Zululand in the second half of the 19th century for a number of reasons, including their desire for the Zulu population to work in the diamond fields of Southern Africa.

Their plan to establish a South Africa federation in the area (thus destroying autonomous African states), and Boer land claims on territory held by the Zulu kingdom that was supported by the British.

Shaka Zulu had a strong hold over the Zulu country at the time of his birth. Shaka Zulu’s half-brother Mpande was the father of Cetshwayo.

Shoshangane, the head of a rebel band that had left the Zulu kingdom and created their own kingdom close to Delagoa Bay, was at odds with Shaka Zulu.

Mpande was dispatched to the newly founded kingdom to exact tribute and annex it into the Zulu Kingdom. Shoshangane’s force was able to beat Mpande’s men, forcing him to flee.

He discovered during his retreat that Shaka’s half-brother Dingaan had murdered the monarch. He relocated to Engakavini, where Cetshwayo grew up, out of fear that he may suffer the same fate.

Mpande defeated King Dingaan’s army in 1840, and as a result, he was crowned king of the Zulus.

Before becoming king, Mpande had unusually early announced Cetshwayo as his heir. Mpande even went so far as to introduce Cetshwayo to the Boer Volksraad at Pietermaritzburg in 1839.

The heir is born of the woman the King chooses as his primary wife, according to the rules of succession. Because Cetshwayo was born of a wife Dingane gave to Mpande, Dingane declared him to be the heir.

Mpande had both British and Afrikaner immigrants on his borders throughout his rule. To avoid offending either group, he made some of the Zulu Kingdom’s land available for cession.

Due to the fact that Mpande was frequently seen as a weak man compared to his contemporaries, Cetshwayo started to establish control over the Zulu people.

Mbuyazi, the son of his most cherished wife, started to receive favors from Mpande as a result of his concern that Cetshwayo was becoming too powerful. Mbuyazi and Cetshwayo developed a rivalry.

In the summer of 1852–1853, drought and famine struck the Zulu nation, and many factions saw civil war as a chance to gain cattle.

Mpande increased his expressions of support for his son Mbuyazi as the situation deteriorated. Mbuyazi received a sizable parcel of territory in south-east Zululand from Mpande in November 1856, but at the same time, Cetshwayo was not allowed to meet with him to address the succession issue.

When Cetshwayo’s supporters were driven out of the area and Mbuyazi and his allies, the iziGqoza, withdrew to their territory just north of the Thukela River, the conflict seemed inevitable.

Mpande supported Mbuyazi in the subsequent battle of Ndondakusuka, along with John Dunn. Cetshwayo, however, decisively defeated his brother in 1856 on the banks of the Tugela River.

Mpande once more turned to the British and the Afrikaners for assistance as he attempted to stop Cetshwayo from endangering his authority.

Theophilus Shepstone, the British secretary for native affairs in Natal, encouraged Cetshwayo to declare his allegiance to his father.

As a result, in 1865, Mpande and Cetshwayo reconciled, and in 1857, Cetshwayo and Mpanda reached an agreement under which Cetshwayo would have effective control over the country and Mpande would retain “ultimate” authority and the title of king.

Nevertheless, for the following 15 years Cetshwayo appeared to be in charge of the Zulu nation. He revived the amabutho system and attempted to stop the transfer of power from the crown to the izikhulu (territorial chiefs).

Cetshwayo was given permission to visit the UK in July 1882 with the intention of lobbying British leaders to promote the restoration of the Zulu monarchy. Although permission was given, the ensuing strategy guaranteed the monarchy’s long-term emasculation.

Umtonga was Mpande’s third son (older than Cetshwayo). He also started to be seen as a threat by Cetshwayo, who chased him into Utrecht (a territory that Mpande had given up in 1854) in 1861.

In exchange for turning over his brother, the Boers were promised a strip of territory by Cetshwayo’s army, which was camped on the Boer Republic’s border.

If he saved Umtonga’s life and Mpande signed a deed granting the Boers the additional territory, the Boers were willing to grant his request.

The additional area stretched from a location on the Pongola River to Rorke’s Drift on the Buffalo River. This new border was formally drawn in 1864 as Utrecht grew.

Cetshwayo believed that a portion of the arrangement he made with the Boers had not been kept when Umtonga fled from Zululand to the Colony of Natal in 1865.

When he attempted to retake the country, Cetshwayo’s Zulu army and Paul Kruger’s Boer commando set up shop along the boundary between Zululand and Utrecht, almost starting a war. Sir Anthony Musgrave, the Lieutenant Governor of the Colony of Natal, was requested in 1869 to settle the dispute between the two parties, but he was unable.

Mpande reigned until his death on November 19, 1872, while increasingly withdrawing from public life, even though it was obvious at this point that Cetshwayo’s authority was stronger than Mpande’s.

At Zululand, in his Kraal Nodwengu, he passed away. Cetshwayo succeeded to the throne after his passing, and the following year an official coronation ceremony was held.

Boers invaded Zululand in 1875, seizing land south of the Phongola River and making attempts to levy taxes on Zulu homesteads in the northwest.

The Boers eventually withdrew after several thousand men were sent to the border. When the British conquered the South African Republic in April 1877, the situation was ultimately resolved.

Zulu independence faced a new danger with the arrival in March 1877 of Sir Bartle Frere, the British High Commissioner for South Africa and Commander-in-Chief of all British forces.

Although Shepstone and the British originally supported Cetshwayo, as the Zulu country expanded in military might under his authority, the Zulu King soon became a threat to the British confederation of South Africa.

The British strategy at the time was to avoid going to war with the Zulus, but Sir Frere organised a campaign to seize the Zulu kingdom.

Frere carried out his war plans even though the British parliament did not fully support them. The Zulu were offered the impossible choice disarm or cede their sovereignty on December 11th, 1878, under the dubious pretext of a few minor border incursions into Natal by Cetshwayo’s supporters.

War broke out between the two countries after King Cetshwayo turned down the ultimatum. Despite winning the important Battle of Ulundi, the Zulus lost the Battle of Isandlwana (oNdini).

Despite Cetshwayo’s escape from Odini, British dragoons quickly apprehended him in the Ngome Forest. He was detained and banished to the Cape. When he later received permission to visit London and saw Queen Victoria, she gave him permission to go back to South Africa.

Shepstone met him in Port Durnford in January and worked out the specifics of his restoration; however, he was denied the use of an army to protect his much diminished ‘country’ because it was agreed that Zibhebhu kaMaphitha would take over the authority of Zululand’s northern region.

By March 1883, Cetshwayo’s uSuthu had marched against Zibhebhu in his designated northern zone and was advancing against Cetshwayo’s allies.

The uSuthu were vanquished, driven into Transvaal, and forced back toward oNdini in the south. The Mahlabathini plain was the scene of a civil conflict involving Cetshwayo and Zibhebhu, in which the uSuthu was once more victorious.

The leadership of the uSuthu was completely destroyed, but Cetshwayo and his 15-year-old heir, Dinizulu, were able to flee the capital of oNdini and hide out in the Nkandla forest.

On October 15, 1883, Cetshwayo was brought to Eshowe by Henry Francis Fynn Jr., the British Resident in Zululand.

Cetshwayo passed away in the afternoon on February 8, 1884. As he appeared to be in good health that morning and was observed taking his normal early morning stroll, the doctor who examined him to ascertain the cause of death assumed that he had been poisoned.

When he informed the King’s relatives that the process of this inquiry would require dissecting the body of the King, they prohibited him from performing a post-mortem inquiry into the cause of death.

The doctor confirmed that syncope, the outcome of a cardiac condition, was the cause of death (Binns, 1963).

Cetshwayo’s body was brought back to the Nkandla Forest for burial, and his uSuthu and Zibhebhu’s conflict persisted. On May 20, 1884, Cetshwayo’s son Dinizulu, who was the rightful heir, was crowned monarch.