King Ezana of the Ancient Kingdom of Axum 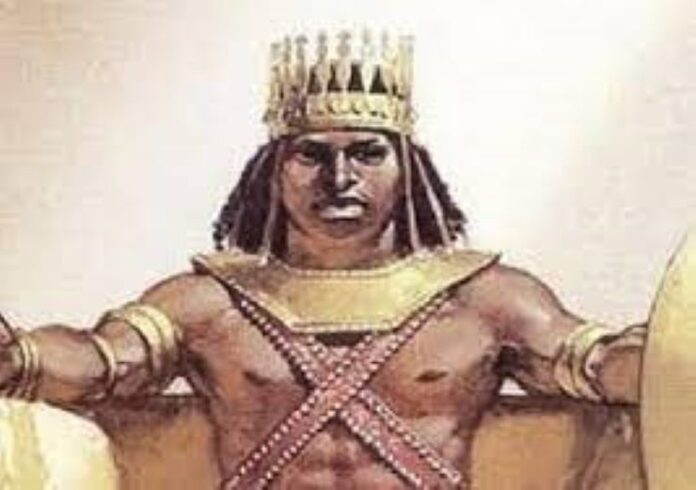 Although little is known about Ethiopia until the 12th century, the reign of Ezana in the early to middle 4th century stands out due to the abundance of writings he left.

Axum was the predecessor kingdom of contemporary Ethiopia, and it was located in the country’s north.

Ezana (also called Aezana or Aizan) was a famous ruler of the Kingdom of Axum, an ancient kingdom located in what is now Eritrea and Ethiopia (320s – c. 360 AD).

About the kingdom of Axum

During the first century C.E., the kingdom of Aksum began in Ethiopia. For ages, this prosperous African civilization prospered, dominating a wide territorial state and having access to vast trade routes connecting the Roman Empire to the Middle East and India.

Axum, the capital city, was a thriving metropolis with a peak population of 20,000 people. Axum was notably notable for its ornate monuments and written script, as well as for spreading Christianity over Sub-Saharan Africa.

Axum was located in northern Ethiopia’s highlands, in the Tigray region, near present-day Eritrea. The land and the valleys below had been inhabited by humans since the Stone Age, and farming villages had existed for at least a millennium.

However, the kingdom of Aksum’s origins remains unknown. People from the kingdom of Saba, located across the Red Sea on the southern tip of the Arabian Peninsula, may have migrated into the area and affected its culture in the first millennium B.C.E.

The city is situated on a highland 2,000 meters (6,562 feet) above sea level. Its climate, rainfall patterns, and fertile soil make it ideal for livestock herding and cultivation.

Most significantly, the city was strategically located at a crossroads of trade routes flowing from the East African coast to the continent’s interior.

These business benefits were fully exploited by the Aksumites. Their most valuable export items were probably gold and ivory, but they also trafficked tortoise shells, rhinoceros horns, frankincense, myrrh, emeralds, salt, live animals, and enslaved people.

The kingdom ruled over a span of territory that included Tigray and northern Eritrea, the desert, coastal plains to the south and east, and much of the Red Sea coast (in present-day Djibouti and Somalia).

Ezana succeeded his father, Ella Amida, as king while still a child, and Ezana’s mother, Sofya, served as his regent until he reached the age of majority.

However, he was named Abreha at birth and had a twin brother named Asbeha.

He also had two brothers, Adephas and Sayzana whom both played important roles in his adventures against various ethnic groups in what is now northern and north-western Ethiopia.

Tyrannius Rufinus, a Roman-trained scholar, and theologian claims that Ezana and his brothers were educated in Greek and Christianity.

During his father’s reign, the father took in two shipwrecked Syrian Christians, Aedesius and Frumentius.

Frumentius converted and baptized the brothers to Christianity and instructed Abreha and Asbeha as they got older.

King Ezana left the largest influence on Axum when he established Christianity as the official state religion.

He chose Frumentius as head of the church and issued new coinage bearing the Christian cross.

King Ezana was the first Ethiopian emperor to convert to Christianity, and he established it as the state religion at Axum or Aksum.

King Ezana is credited with founding Axum the first Christian state in history.

Ezana’s military campaigns were also successful. He subjugated numerous countries near the Erytheran Sea, or the Red Sea and its environs.

He is also said to have invaded and conquered the Kingdom of Kush, or modern-day Sudan, as well as Meroe in the 300s AD.

Ezana also increased trade (his coins have been discovered in India) and led military expeditions that brought the Kingdom of Kush under Axumite rule, including the city of Meroe on the banks of the Blue Nile.

Meroe still bears the scars of Ezana’s conquest; monuments and writings he carved can still be found there.

He also discovered the Ark of the Covenant on the island of Tana Kirkos and transferred it to its current home, the Cathedral of St. Mary of Zion, which he erected.

The tallest standing steel construction is King Ezana’s granite stele which is around 78 feet tall.

Ezana is also credited with locating the Ark of the Covenant on the island of Tana Kirkos. He took it back to install it in the Cathedral of St. Mary of Zion, which he built and gave to Ethiopian Christians.

Ezana’s contribution to bringing Christianity to the Axumite Kingdom is still felt in Ethiopia today.

In reality, the Ethiopian Orthodox Church has declared Ezana a saint in recognition of his role in bringing Christianity to Abyssinia.

He invaded the Nile valley kingdom of Kush (Meroe) and expanded his kingdom’s borders to include not only what is now Ethiopia, but also sections of Sudan and Somalia.

According to the inscriptions from his reign, his dominion spread to both sides of the Red Sea and then to territories in both Asia and Africa.

Aksum served as his capital and as king, he expanded the kingdom of Aksum and adorned his city with buildings and monuments, including obelisks.

He popularized the title “King of Kings,” which was still used by Ethiopia’s monarchy in the 1970s. He was not the creator of the Ethiopian Empire, which he inherited from his predecessor, but he did lay the groundwork for its current cultural and religious character.

His reign was prosperous, and external trade flourished. Many Greek merchants came to Ethiopia to trade in ivory, gold, tortoise shells, hides, and spices.

Like his predecessors, Ezana minted coins with Greek legends on them, to facilitate external trade. He also fought to open up the road leading to Egypt.

During his reign, ancient Ethiopian culture took on its final character. The Ge’ez language became independent of the Sabaean. It became vocalized and finer and new terms were introduced into it.

Among the new words introduced was the word “Egziabher,” meaning “God”, which is still used in modern Amharic.

Frumentius, Ezana’s tutor, traveled to Alexandria in Egypt to inform Patriarch Athanasius (c. 293–373), the ecclesiastical leader who maintained Christian orthodoxy against the Arian heresy, that the country was ripe for Christianity.

He did this in the hopes of sending a bishop to Ethiopia. He was designated as the first bishop. When he returned, the first thing he did was convert the king to Christianity. He accomplished this and it gradually spread among the people.

The king took on the role of protector of the new faith, which was thus free from persecution. The arrival of Christianity heralded the beginning of a new period of peace in Ethiopia.

Ezana left the first recorded inscription on a stone stele in three languages: Geez (Old Ethiopic), Sabean, and Greek. Ezana was dominating the kingdom by this time, and he chronicles the breadth of his possessions as well as some details of military campaigns to the north.

He dispatched his brothers, Shaiazana and Hadefan, to control the Beja tribe, who had been plundering northern commercial caravans. Ezana’s diplomatic competence was demonstrated by his careful treatment of these defeated people.

Instead of oppressing or enslaving them, he lavished them with luxury and had them relocated to a fertile region of Axum where they might live in affluence and peace.

Several more later inscriptions have been discovered that reference trips to locations that can no longer be identified, and the general jumble of vocabulary makes determining the precise area of Axum at the period impossible.

It is unclear, for example, whether Ezana governed or invaded southern Arabia. Axum maintained close contact with the Christian states of the eastern Mediterranean through leaders like Frumentius.

Several centuries later, the development of Islam isolated Christian Ethiopia from the rest of the globe. There is no official or explicit record of Ezana’s conversion to Christianity, but the alterations in the emblems on Axumite coinage attest to it.

For the first time, Ezana’s fifth and final known inscription pays praise to the Christian god, and it goes on to chronicle his crucial capture of the ancient city of Mero in northern Sudan. This conquest effectively ended the reign of the kingdom of Kush, which had previously dominated Lower Egypt.

Ezana is also regarded as a brilliant builder, and he may have been responsible for the construction of the large pyramids that can still be seen in the town of Axum.

According to legend, Ezana was killed in a battle in western Ethiopia. His remains were returned to Tegré, where it was interred in a monolithic rock-hewn cathedral dedicated to him.

The Ethiopian Church has declared Ezana and his brother Sayzana to be saints, and their remembrance is celebrated on the 4th of Tekemt (October 14).