The Ethiopian Queen Who Avenged Ethiopians for Chopping Off Her Breasts 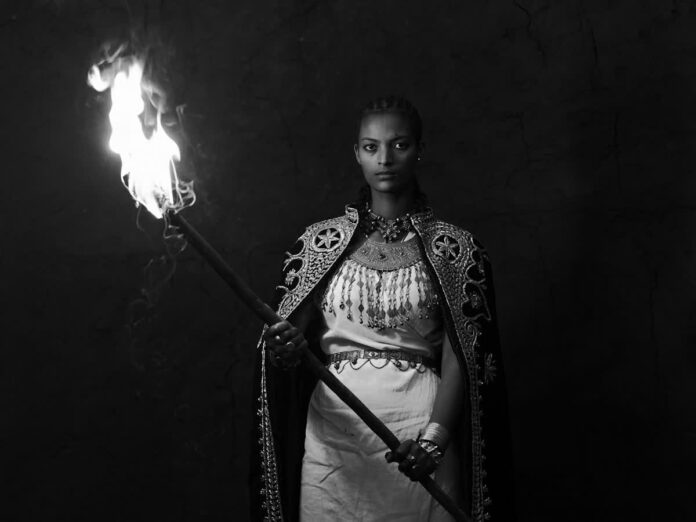 What guts? The Ethiopian queen who avenged Ethiopians for chopping her breasts is Queen Gudit/Yudit. History does not quite record all the details.

She became a ruling Ethiopian Queen and she ruled for more than 40 years. She is most popular for the damage she purportedly did to the Ethiopian kingdom.

The records say that she invaded the kingdom of Ethiopia from the south and destroyed the city and the landscape as well.
She was avenging her boobs.

Although there are not enough details about her reign, we have quite a few theories to would look at.

Where is Ethiopia located in Africa?

Ethiopia is an African country landlocked in the Horn of Africa with a unique culture that survived colonial rule. Many believe that its culture survived because of the terrain of Ethiopia. Its terrain made the region a mountain fortress surrounded by deserts. These deserts make their steep escarpment walls unattractive to marauders.

As early as 1987, Lewis, an archaeologist called Ethiopia a “mysterious, isolated, diminished but unconquered” territory.
This exotic African nation is famous for its origin in the coffee beans and is a place where Olympic gold medalists are forged. It is also very popular for its rock-hewn churches as Ethiopia has a long history as a Christian nation in the bible. It also has ties with Islam and Jews.


For resources, Ethiopia is also the top known space where you find honey and coffee. The country has the largest livestock population in Africa.

Was Ethiopia unconquered all through history?

There was a time in history when Ethiopia fell under brief occupation by the Italians in 1936. Despite this, it is largely correct that Ethiopia is unconquered. Why were they this fortunate to not experience colonial rule?

Their terrain is favorable. The land is an unattractive desert and it may have access to the Red Sea but otherwise, it is cut off from all notable trade routes. It would have been costly to go to Ethiopia specifically.

Also, the religion of Ethiopia was not favorable. It was the first formal Christian nation and dates back to late classical antiquity. This became significant during the Age of Exploration by Europe. In this era, colonial powers treated non-Christian territories as fair game for whatever they wanted to do. They were reserved when it came to relations with Christian powers.

Despite this view, it became the largest target of the Italian colonial efforts in the ear of the Scramble for Africa. The third factor that protected Ethiopia is the fact that it modernized quickly. The nation was intentional in investing in agriculture, administration, and the building of its military.

By the 19th century, it was a wealthier and better-organized country than all the African nations surrounding it. This is why when the Italians wanted to take over in 1890, the Ethiopians mobilized and drove them back.

Ethiopia was able to defend itself more than other African nations at that time and was the only one that successfully mounted an anti-colonial defense.

Breasts being cut off

So back to the story, there was a queen who had her breasts cut off. Instead of rolling over and playing dead, she got up and went to Ethiopia to carry out her revenge. It happened in the year 960AD.

The year is 2022 now, there is still no justification for cutting off the breast of a woman, what reason could they have to cut off the breasts of a queen, and it is not often practiced in Africa today.

In the times that existed before now, the Kingdom of Axum (also known as Ethiopia) existed from AD 100 until about 970 AD and was one of the wealthiest kingdoms.

This was long before it was ravaged by a queen whose rage knew no bounds.Her name is Yudit/Gudit. History says she invaded the Kingdom of Axum from the south and destroyed everything in sight including its landscape.

She was touted to be the Queen of Damot at a time. Damot is a kingdom, located near the Blue Nile. They say she was related to the Sidama people of Ethiopia.

Another version of the story says that Gudit was a Jewish woman from the Agaw tribe and that she made claims of being a Beta Jew (also known as an Ethiopian Jew). It is believed that her husband converted her from the beginning. Her husband’s name is Zenobis.

Another version claims that she appeared with the Sata’at of Showa. Also in Ethiopian fables, she is reputed to be the daughter of the well-known King Maya who was also called Badit.

Somalians believe that she was one of the Harla. Another name for her is Arawelo.

They say that she was a young girl who grew up in a non-Christian family. The records imply that she suffered much marginalization because she refused to convert to Christianity.

History says she fell in love. She loved a young Christian deacon. Her love interest was given the responsibility of taking care of God’s ark in the Church of Zion. She asked him to bring her the lid of the replica of the tablets of the law. The tablets are called Tabot. It was an act of love.

As soon as she got the gift; she made shoes for herself and danced around the town. She was accused of blaspheming the church, and the holy artifact that she was given.

For her actions, she was punished by having her breasts cut off. She was sold to the Middle East merchants as a slave.
Another version of the story says that Zenobis who was the son of the King of Sam (also known as Syria), fell in love with her and married her.

She tried to convince her husband to attack Axum and he refused. He did so because he knew the strength of the Axum army. Being a resourceful woman, she utilized the spies at her disposal and discovered that King Degnajan was away at a particular time. Thus, she planned an attack on Ethiopia.

They say, Gudit came back to Axum on a mission to carry out vengeance on all who had hurt her. She hid in the monastery Debre Bizen in Eritrea.

To date, no woman is allowed in the monastery because of the destruction that Gudit wrought on the nation of Ethiopia.
She attacked Axum with her husband as the army chief.

The attack was so swift and efficient. The forces of the Kingdom of Axum could not withstand the army. They could not defend their territory. King Degnajan sent a letter to Philotheus, the Patriarch of Alexandria in Egypt. He requested help but there was no help.

She destroyed some churches in the Tigray region. Some of the places she destroyed still bear the marks of the destruction that she made to date.

Paul B. Henze, a renowned historian said about Gudit, “On my visit to the rock church of Abreha and Atsbeha in eastern Tigray in 1970, I noticed that his ornately carved ceiling was blackened by soot. The priest declared it to be the work of Gudit, who piled the church full of hay and set fire to it nine centuries earlier. Gudit ruled for four decades.”

She was considered to be one of the sharpest warriors and strategists in Ethiopia. Her name Gudit in Amharic is Esato. It means fire.
The son of King Degnajan succeeded her.

Yet another story speaks of Queen Regnant Gudit of Bani al-Hamusas of Demot (Olden days Ethiopia). This record says that she was a Northern Ethiopian ruler and maybe a Jewess. They say that she became a military leader and attacked the ruling Aksumite Dynasty. She is credited with the downfall of the kingdom.

No one is particular about where Bani al-Humusa is located but many say it is in the South of the Nile and southwest of Shava.
A less complimentary record exists. They say an Ethiopian queen existed named Gudit, Yodit, Isat, or Ga’wa. Of the good, they say, she was a beautiful woman from the Ethiopian royal family and had good and bad characteristics attributed to her.

Of the bad, they say she was a despicable prostitute. That during the time of political weakness, she killed the Ethiopian king. That she captured the throne and ruled cruelly. She is credited with destroying Aksum, the capital of Ethiopia, persecuting the priests, and closing the churches.

Historical evidence via the book, History of the Patriarchs of the Egyptian Church presents documentary evidence of a historical queen of Ethiopia in the tenth century.

These chronicles quote a letter written in AD 980 by a certain king of Habasha to the patriarch of Alexandria, Egypt. The letter is a plea to the new patriarch for a new metropolitan in Ethiopia after a long period without one.

There is also mention of a certain Queen of the Bani al-Hamwiah. They said she imprisoned many Ethiopians, burned towns, destroyed the churches, and drove the Ethiopian king from place to place.

The reign of the Queen ended only when the patriarch Philotheus (973-1003) finally sent a new metropolitan to Ethiopia.

Most likely True Story of the Ethiopian Queen

Yet a more recent record argues that Gudit was the tenth-century Queen of Abyssinia. She was not a rebellious pagan vassal who conquered the Abyssinia throne and destroyed Aksum. She did not persecute priests or ruin churches.

Neither was she a beautiful but poor prostitute. She did not sleep with a priest and faced exile for tempting him before marrying a Syrian Jew and becoming Jewish. She did not burn Aksum and destroy churches while persecuting priests and people.

Modern scholars have intuited that Gudit was a legitimate member of the Christian Ethiopian royal family. She captured the throne during a succession struggle and was credited with restoring peace and order.

She ruled the country with authority for forty years and founded a new, strong Christian Dynasty that lasted for more than 300 years.
The negative stories of the queen that abound are because of the aversion to accepting the concept of a woman on the Ethiopian throne.

Share
Facebook
Twitter
Pinterest
WhatsApp
Previous articleGanga Zumba: The African Prince Who Escaped Slavery to Rule as a King in Brazil
Next articleLady Calls Off her Wedding Three Days Before, Due To Domestic Violence