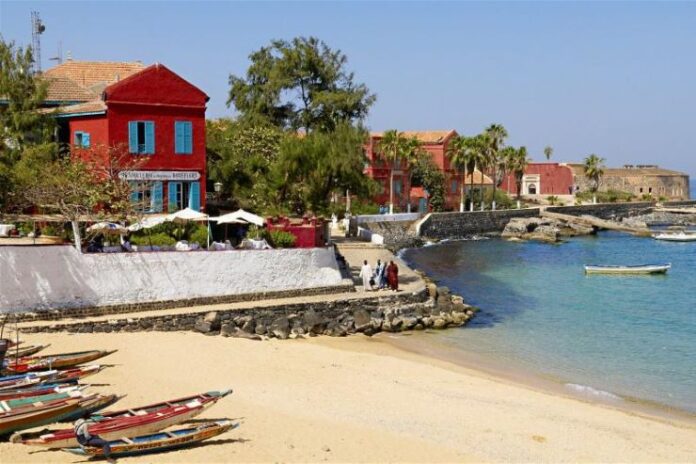 Ile Gorée is calmness in itself with only pastel-colored cottages and winding cobblestone paths. It is honestly at the top of many tourists’ to-do lists in Dakar.

Although Gorée played a significant part in one of humanity’s biggest tragedies (the slave trade) its history is everything pleasant.

Here is a brief account of how Ile Gorée changed from a center for slaves to a sanctuary.

The Portuguese were the first to plant their flag on the previously uninhabited rock in 1444, making Ile Gorée one of the earliest European settlements in West Africa.

It is easy to understand why Gorée was prized by European navigators and merchants looting the African coastline given its strategically located two kilometers (1.25 miles) off the mainland, deep-water harbor, and manageable, defendable size (45 acres).

As a result, the island changed hands more often than it cares to remember, first yo-yoing between the Portuguese and Dutch, who gave it the name “Goe-Ree” (Good Harbour), before the British and French started the same tit-for-tat dance.

With the exception of a few more years of British re-capture and loss, it remained primarily in French hands after the French invasion in 1677 until Senegal’s independence in 1960.

Due to its geographic location, Gorée had a strong mercantile attraction and served as a platform for the export of goods from West Africa, including grain, peanuts, and beeswax, to Europe and the Americas.

However, Gorée is primarily recognized for its part in the most notorious export from West Africa: slaves.

According to UNESCO, Gorée “was the main slave trade center on the African coast from the 15th to the 19th century,” with an estimated 20 million slaves travelling through the island between 1536 and 1848.

There is no doubting that for many Africans, Ile Gorée was the last place they ever saw of their continent, despite certain historians’ attempts to minimize the numbers.

Local tribes sold a lot of them. Others were purchased and stolen by colonialists from Europe. None arrived on their own will.

Slavery was abolished twice in France: first during the Revolution of 1794 and once more in 1815.

Both continued the practice in their territories, and Senegal didn’t outlaw slavery until 1848, 312 years after the Portuguese introduced it.

Gorée changed its purpose in the years that followed, supplying the slave homes with gum, peanut oil, and ivory.

However, the establishment of Dakar in 1857 and the nearby town of Rufisque two years later signaled a decline in the island’s importance.

However, after the French granted it commune status, it became the first western-style municipality in West Africa in 1872, complete with an elected mayor and municipal council. It was finally annexed by Dakar in 1929 and continues to be one of its 19 communes today.

Today, visiting Gorée entails traveling to a place on the UNESCO World Heritage List that seems a million miles away from Dakar.

Pale colonial-style homes sway to the rhythm of the streets’ twists and turns. Wooden shutters and pelicans are swooping past as they float by.

In the alleyways leading to the castle, which is perched atop a hill and was used by the Vichy government to observe the Allies during the 1940 Battle of Dakar, are artists.

The expansive views of the Petit Côte and Cap-Vert Peninsula are reflected by the Atlantic’s never-ending emptiness. An image that must have been absolutely terrible centuries ago.

Ile Gorée is still a product of its past, with traces of it visible in every nook and cranny, but one structure in particular honors the city’s brutal past.

The last preserved Slave House from Gorée’s horrific heyday is The Maison des Esclaves. It was constructed in 1772 and turned into a museum in the 1960s; it serves as a testament to the brutality and scope of the transatlantic slave trade.

The first thing that strikes you as you enter the wooden doors is its size—or more accurately, lack of size.

There were more than 30 of these homes on the island since it is acceptable to save space when housing people in filthy, small, windowless cells.

The frightening door frame of what came to be known as the Door of No Return is directly ahead.

The museum upstairs is startling in its understatement: shackles for the feet, ankles, and neck. the tools of punishment.

A striking statue depicting a man and woman escaping their bonds is now located outside. The 1700 Senegalese who now live freely on the island are symbolized by laughing youngsters; Gorée’s population left quietly but never forgot.

Also read: 10 Most Visited African Countries by Tourists Each Year

Ile Gorée is one of the most visited destinations in Dakar, so getting there early is always a smart idea.

However, the actual secret to enjoying Gorée is to travel in the opposite direction of the masses.

After getting off the ferry, the majority proceeds to the restaurants (on the left), accompanied by tour operators and peanut merchants.

Right across the beach, turn around where you can, and continue along the shore. You will view the entire island of Gorée because it is not very large. You just don’t have to witness it with the rest of the group.