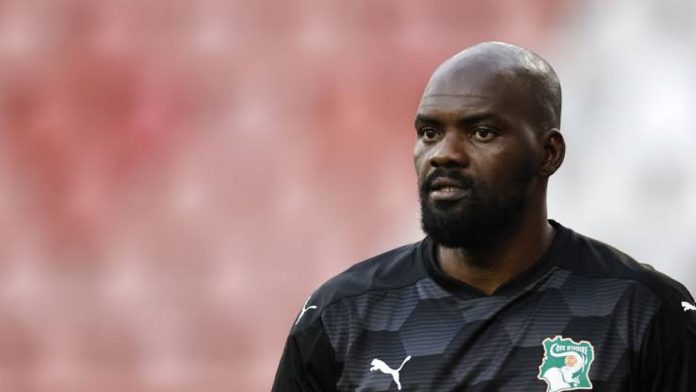 Sylvain Gbohouo an Ivorian goalkeeper has been placed on suspension until June 23, 2023, after testing positive for the banned drug trimetazidine.

According to reports, the Ivorian goalkeeper was placed on suspension by the Fifa disciplinary committee after he tested positive for having the banned drug in his system.

Recall that Gbohouo had also earlier been provisionally suspended in January, by the Ivorian Football Federation, an action taken against him due to a similar reason.

Gbohouo was forced to miss an important CAN game against Equatorial Guinea in mid-January due to the suspension.

However, despite actions taken against the 33-year-old goalkeeper in January, he has found himself in yet another problematic situation, with a suspension said to last an entire year.

Trimetazidine is a molecule classified as a “metabolic modulator” by the World Anti-Doping Agency because it improves blood circulation. It was recently brought back into the news when young Russian skater Kamila Valieva, tested positive before the Beijing Olympics.

After Côte d’Ivoire’s 1-0 loss to Cameroon in a World Cup 2022 qualifier, Gbohouo, the Elephants’ No. 1 goalie, tested positive, an incident that rocked the African football scene and caused a disciplinary panel to immediately be set up.

After several meetings and hearings, it was determined by the panel that the goalkeeper had earlier developed “vision problems” which warranted his need for the drug. According to reports, Gbohouo was sent by the Ivorian medical team to an ophthalmologist, who then prescribed Vastarel, a drug whose active ingredient is trimetazidine, on 29 March 2021.

According to the goalkeeper, the goal of the drug was to “increase his retinal blood flow,” but he “stopped the treatment after a month and a half” due to lack of progress. He said he was unaware that the product was prohibited and that he had no plans to “dope.”

While a positive test would normally result in a four-year suspension from WADA, Fifa’s disciplinary committee decided that the Ivorian goalkeeper had “unintentionally” ingested the banned substance and had not committed any “significant” faults. This helped his case as his punishment was reduced to 18 months from December 23, 2021.