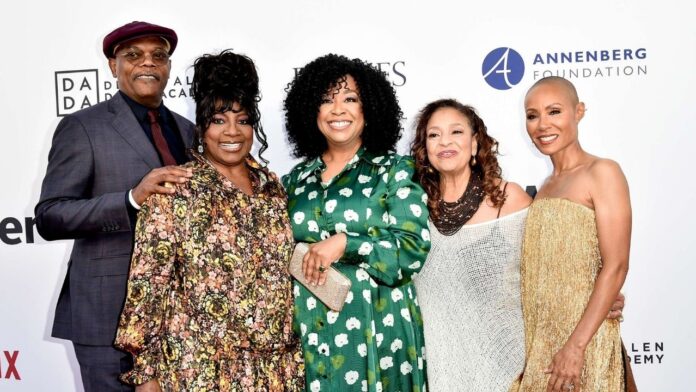 Jada Pinkett Smith stepped out for the first time since the 94th annual Oscar Academy Awards. The 50-year-old actress dazzled in a gold gown on Saturday; as she went out to support Grey’s Anatomy creator Shonda Rhimes at the grand opening of the Rhimes Performing Arts Center in Los Angeles.

The new Rhimes facility will be home to the Debbie Allen Dance Academy. According to Broadway World, it will also include a studio named after Pinkett Smith and her husband, Will Smith.

Saturday’s outing was the first time that Pinkett Smith made a public appearance since her husband; Will Smith, slapped Chris Rock at the Oscars after the comedian made a joke about Pinkett-Smith’s shaved head. The actress has been open about her struggles with alopecia.

On Friday, the Academy of Motion Picture Arts and Sciences announced that Will Smith would be banned from attending any Academy events; in person or virtually for a decade.

In a letter addressed to the Academy of Motion Picture Arts and Sciences family, and obtained by ET, Academy president David Rubin and CEO Dawn Hudson said the Board of Governors in a Friday meeting concluded that “for a period of 10 years from April 8, 2022, Mr. Will Smith shall not be permitted to attend any Academy events,” including the Academy Awards.

See the full story of Will Smith’s action at the Oscar award ceremony.