Jake, The Ghanaian Boy Whose Photo Became One of Africa’s Most Shared Meme 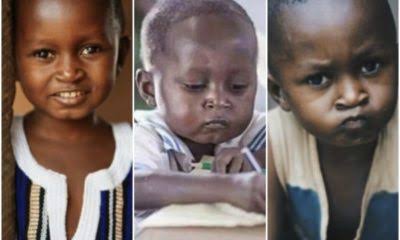 Since 2016, the photo of a young Ghanaian boy has been used several times as a meme on social media to hilariously portray seriousness, exam fever, and others.

It turns out that the boy was five years old at the time and is a Ghanaian originally from the eastern region of Ghana in a town called Asempanaye near Koforidua.

The thoughtful-looking boy, whose photo became a successful meme across Africa, was tracked down and revealed to be Ghanaian.

According to an article written by Arthur Chatora’s website for This Is Africa, the boy, allegedly named Jake, was photographed by a Ghanaian artist named Solomon Adufah, who was conducting an art workshop with a group of children in Ghana.

If you have ever wondered where the famous meme of a young African man frantically writing on a piece of paper with a thoughtful expression came from, your search is finally over.

Jake’s photo is currently one of the most famous and widely shared memes on the continent due to its nature.

The most popular meme of this image is the one where they portray Jake as someone reminiscent of an evil class captain who was always ready to give his teachers, names of his classmates for them to be punished.

The Ghanaian artist behind the photo, Solomon Adufah, shared the image on Instagram in January as part of the artist’s “Home Series”, in which he travels to various African countries to help provide resources to underprivileged children in local communities and deliver workshops for creatives, studies.

“Jake was one of the children taught in Ghana. He was always kind and calm. He is always present in classes and willing to learn every day. I loved that about all the kids. Their enthusiasm and good humor were invigorating and encouraged me to continue helping them,” noted Adufar.

Although born and raised in Ghana, Solomon Adufah has lived in Chicago, Illinois for the past nine years. He taught himself to become the artist he is today and developed his hobby of drawing into a professional art career.

Originally doubting art as a stable endeavor, Solomon Adufah turned to architecture. Realizing the need to bring to light the positive wonders of Africa, he made painting his permanent commitment.

Since moving to Chicago, Adufah has struggled with the negative perceptions of Africa that have continually tarnished her history and the media. He was perplexed by Africa’s perception of war, poverty, and hunger shared by black Americans.

Using his artworks as a tool to respond to this narrative, the artist articulated a personal mission to “empower, advance and celebrate African culture through his portraits”.

What is critical in creating the Homeland Series: Ghana is Solomon Adufah’s physical involvement with his subjects. His practice consists of traveling to Africa and capturing the people he meets on his travels.