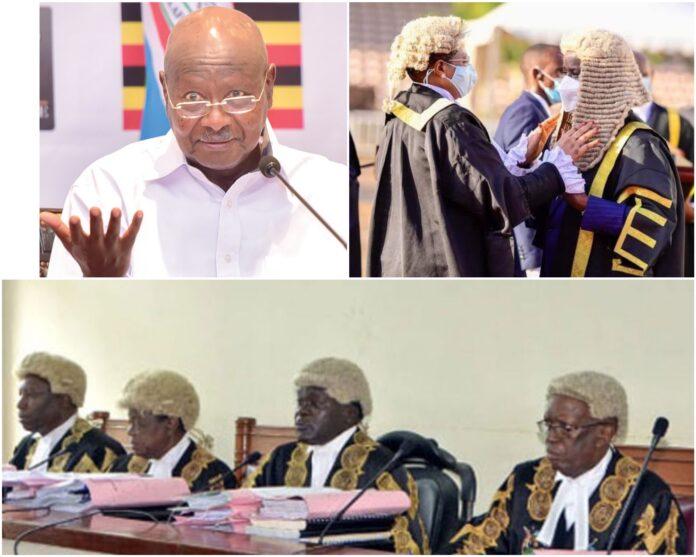 President Yoweri Museveni of Uganda has expressed his displeasure in the outfits commonly worn by judges within the country, especially as it involves colonial wigs.

He communicated this to spokeswoman Anita Annet, her deputy, Thomas Tayebwa and Judge Alfonse Owiny-Dollo.

He explained that the wigs worn by legal practitioners and top officials in the country’s judicial arm are “embarrassing” and should be reserved for “lunatics.”

Recall that On March 25, 2022, Museveni spoke in Kololo after deputies elected a new speaker and vice president. Anita Among was elected speaker, replacing the late Jacob Oulanyah.

In his comments after the swearing in oath of office for the new officials, Museveni condemned the wearing of wigs, saying that they should be reserved for the insane.
He asked the new speakers to change the way they wear wigs and do away with the wigs introduced by their colonial masters.

“You see the wigs they put on. Wigs! Why are you wearing wigs? I was a speaker, but I never put on the wig. I’m not crazy. In Tanzania, they changed, they don’t wear wigs,” Museveni said.

“That’s what’s happening, we’re taking a lot of things from other places. Imagine those wigs the speakers put on. I feel embarrassed when I see the Chief Justice and Speaker putting on wigs. Why are we copying these things? By the way, I was a public speaker myself, and I never wore that wig.”

While there has been a protracted, divisive, and low-intensity debate over whether or not Ugandan judges should wear wigs and gowns introduced by British colonialists, It seems to be spreading across the board as similar talks have been raised in other parts of the continent.

Each of the 82 Ugandan judges is entitled to a pair of wigs, collars and headbands, robes, striped pants for male judges and skirts for female judges upon appointment.

Each pair of uniforms costs Shs 20 million, which means that the judiciary spends Shs 1.6 billion to formally dress the 82 judges of the Superior Court, the Court of Appeal and the Supreme Court, the highest court of appeal in the country.

A set of longer official attire is used for ceremonies, according to the judiciary, while judges wear the shorter version when presiding over court sessions.