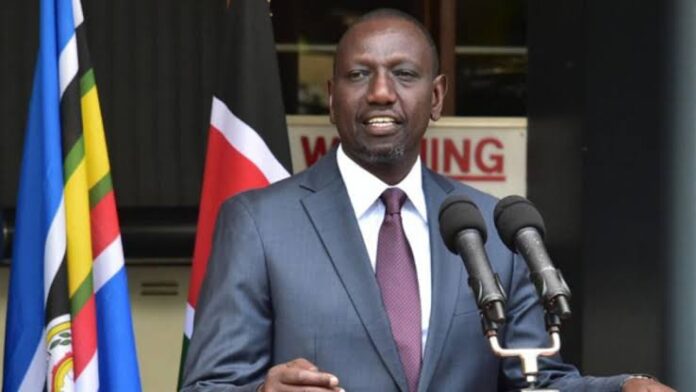 A week after the Supreme Court confirmed his victory, William Ruto has been sworn in as Kenya’s fifth president as Tens of thousands of supporters attend the ceremony.

The former vice president is the fifth person to hold the country’s presidency after a divisive vote he narrowly won on August 9.

“You will be president not just for those who voted for you, but for all Kenyans,” Kenyatta told Ruto on the eve of his inauguration, apparently putting aside the previous dispute.

According to police, the 60,000-seat Kasarani Sports Center in Nairobi was already full at 5am.

Despite orders to stay indoors, the crowds kept trying to get inside. Dozens of people were reportedly injured in the rush.

“We had to treat some with minor injuries. Most of them were taken to Nairobi’s main hospital,” a doctor told the Associated Press.

The crowd cheered as Ruto, 55, and Kenyatta shook hands, sealing the transfer of power.

Also, read; Namibia and Botswana Sign Deal To Stop Use of Passports Between the two Countries

Recall that both men were indicted by the International Criminal Court for the deadly violence that erupted after the 2007 elections. However, the charges were later dropped.

This year’s election was peaceful, marred only by opposition supporters who tried to prevent Ruto from being declared the winner.

Kenya’s Ruto now leads a country saddled with heavy debts that he must manage while fulfilling his promises to the country’s poorest.

His campaign focused on his past as a roadside chicken salesman, setting him apart from the powerful political dynasties of Kenyatta and Odinga.

Despite his guidance from Kenya’s former strong ruler, President Daniel arap Moi, Ruto vowed not to retaliate against the opposition and its allegations of fraud during the election.

Odinga accepted the Supreme Court’s decision, but the 77-year-old stayed away from Tuesday’s inauguration.