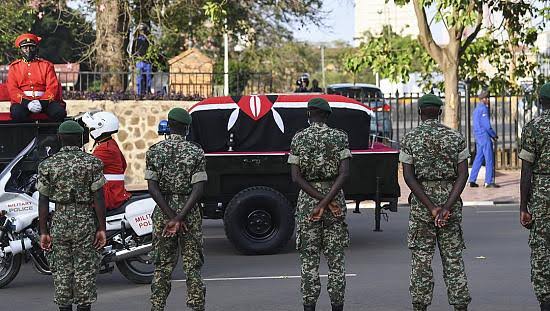 Mwai Kibaki, who passed on last week is set to receive a state funeral on Saturday, 30th April 2022, according to Kenyan authorities.

Kenyans will be able to pay their respects to the former president at a state funeral this Saturday.

The former president’s body laid in state in the national parliament on Monday in an event that gave most Kenyans an opportunity to pay their respects to a president who many have described as a national hero.

“We have lost a hero”, said Nairobi resident Yvonne Onsoti.

Read more: How To Start Casino Business In South Africa

Maryanne Adhiambo, another resident, added; “he (Mwai Kibaki) was a good man. During his time the economy was doing well, now we are suffering. We are mourning him, and May his Soul Rest in Eternal Peace”.

His accomplishments included strong economic growth and investments in education and health care.

“He gave our children free education and I hope that other Presidents that come after him will emulate him and continue with the good work that he did”, said Aggrey Sifuna, a Nairobi-based Kenyan.

The national stadium in the country’s capital will host a burial service on Friday.

Mwai Kibaki’s funeral will take place in his hometown of Othaya, in the Nyeri highlands.