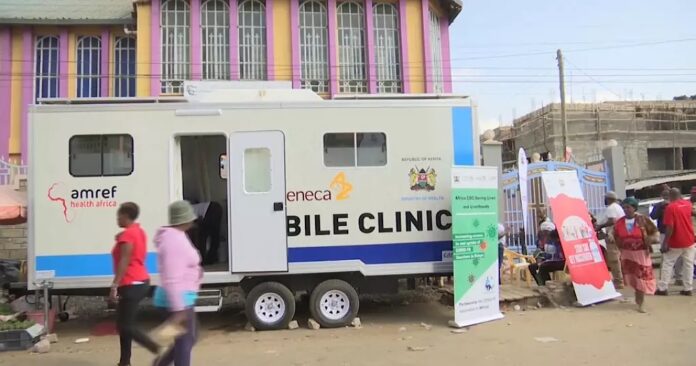 Health workers in Kenya have been showered with praises after they decided to deliver COVID-19 vaccinations to remote areas, using a solar-powered truck.

Currently, healthcare workers have been said to be deployed in the Kasarani district in Kenya’s capital Nairobi on a mission to promote vaccination against COVID-19.

Though the general trend of the virus on the African continent is slowing, but it is not yet fully contained, according to the World Health Organization.

So far, the country has administered 18,535,975 doses of the vaccine, but encouraging everyone to get the vaccination is a challenge, which is where the idea to “use a solar-powered truck in spreading the vaccination” comes in.

According to sources, AMREF (African Medical and Research Foundation) is taking the fight to the streets, with a mobile clinic hoping to increase vaccinations.

The mobile clinic can reach densely populated areas as well as more rural populations, while maintaining the need for cold storage of vaccines such as AstraZeneca and Moderna.

On-site cold storage has proven difficult in the hot and humid climate of some African countries, but according to Dr. Catherine Kanari of AMREF, this unit has a solar power system that helps to overcome this obstacle.

“It may be able to go deeper into communities where access is an issue, not only in Nairobi but also in other districts where we have access issues and also because there are uses of solar energy to maintain the cold chain. It’s an efficient way to ensure that we have effective vaccines,” Kanari said.

Businesswoman Seradelphine Wairimu says she wanted to get the vaccine because she knows many people who have contracted the virus.
But Wairimu says she hasn’t had time to visit a hospital until now.

She says: “This is the first vaccine I have never received before. I have done some research and numerous people have died, even my closest friends and relatives, and I have seen that if I don’t get the vaccine I will put the lives of my compatriots in Kenya at risk and even neighbors.

I’m very lucky because as a businesswoman, I never have enough time. I heard that people are being vaccinated in hospitals far (far) from where I live. Likewise, I used to wonder what to do with the hospital, but now that they got close to me, I decided to take that step.”

This is the first mobile COVID-19 clinic in Kenya, but there are plans to launch 10 more that will serve several districts.

The success of this program can help transform and improve the way healthcare is generally provided across the country and potentially across the region.