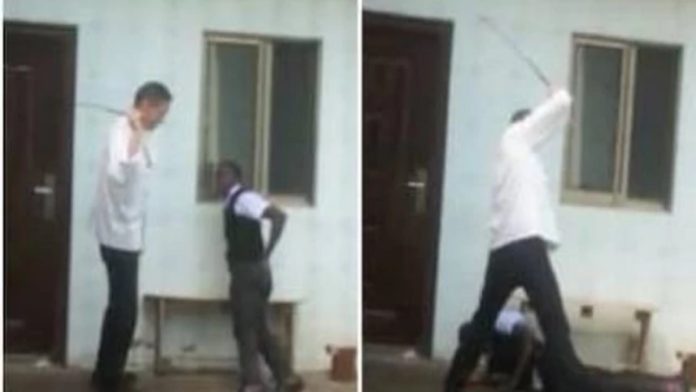 A Kenyan man who was videotaped being whipped by a Chinese national in a Kenyan restaurant is yet to get the Sh3.07 million that the courts imposed as compensation.

Mr. Simon Siro Oseko thought his life had turned around after a Kenyan court granted him Sh3.07 million after he was openly assaulted by a Chinese national on June 29, 2021. That, however, has not been the case.

Justice Mathews Nderi handed down the ruling, ordering the managers of the Chinese eatery, Chez Wou and a Chinese national named Deng Hailan to compensate the Kenyan worker for the violation of his rights.

“What I currently have is a paper that shows I need to be paid. However, I don’t have any cash with me, and it seems that my efforts have hit the wall,” Oseko lamented.

On June 29, 2021, an amateur video of Mr. Oseko receiving strokes from Mr. Hailan made the front pages of local newspapers. As seen in the video, the victim, a qualified chef, is seen and heard sobbing in pain as he is struck for being late to work.

Reports claim that the video was shot by Mr. Victor Kagai, a colleague, who did so because he felt uncomfortable standing idly by as Oseko was being harmed in such a condescending manner.

Kagai mentioned while speaking to local media that the incident, as seen in the video, wasn’t the first. However, workers were earlier unable to do anything significant until recently.

“I decided to put my job at risk and record the video as my colleague was being beaten. It was not the first time this was happening, and I never liked it,” he said.

While speaking to “Nation. Africa,” Oseko claimed that the Kenyan government made a huge mistake when it allowed the four Chinese nationals, to leave Kenya before the case could be concluded.

Interestingly, following the viral video’s release, the Directorate of Criminal Investigations (DCI) investigated the eatery, which has since changed names, and discovered that it lacked the necessary licenses to operate.

Among those who were caught, Mr. Hailan, had a visa indicating that he was in Kenya for work, but he did not have a work authorization.

Mr. Yueping and Mr. Qyang also lacked a work permit, and their visas had expired at the time of their detention. Lastly, Ms Ling, she was found to have had a legal visa but no work authorization.

Mr. Steven Mogaka, who defended Mr. Oseko in court, said it was impossible to locate the Chinese nationals since they had already departed Kenya.

He claimed that his office had contacted the Chinese Embassy and the Ministry of Foreign Affairs, but that he had not gotten a response.

“The court issued the orders and even compensated my client, but things are not going well. We don’t have the Chinese nationals, hence no one is available to be handed the orders,” he said.

To counter the alarming rate of such incidents, Francis Atwoli, the president of the Central Organization of Trade Unions (COTU), has urged Kenyans to report foreigner assaults and abuse immediately.