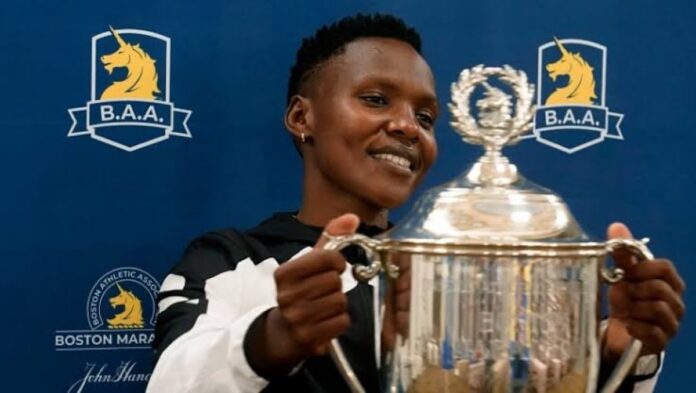 Kenya’s Diana Kipyokei has been banned from running in the marathon for six years and stripped of her 2021 Boston Marathon title for doping and tampering, the Athletics Integrity Unit said on Tuesday.

Kipyokei’s urine sample after the win in Boston in October 2021 showed traces of triamcinolone acetonide – an anti-inflammatory banned in racing unless the athlete has permission to use it as a medication.

AIU said Kipyokei provided “false/misleading information” to explain her substance use, “including forged documents she claimed were from the hospital”.

The Boston Athletic Association announced that Kipyokei’s 2021 Boston Marathon result was disqualified and Edna Kiplagat of Kenya was elevated to victory. Kiplagat is now known as a two-time Boston champion, having also won in 2017.

The BAA said in October it would annul Kipyokie’s win following a conclusive discovery from AIU and sanctions announced.

The group also announced that Kenya’s second marathon runner, Purity Ryunoribo, has been banned for five years for similar offences.

A sample of it, collected in Kenya in May, showed furosemide, which is a diuretic.

“In her statement, she claimed that a doctor at a hospital prescribed medication for her ankle injury and provided documentation. However, investigations revealed that while Ryunoripo was being treated at the hospital, she had amended her prescription form to include Lasix [brand],” AIU said.

The AIU said that Ryunoribo could have been banned for six years but was reduced by one year “due to early acceptance of punishment”.