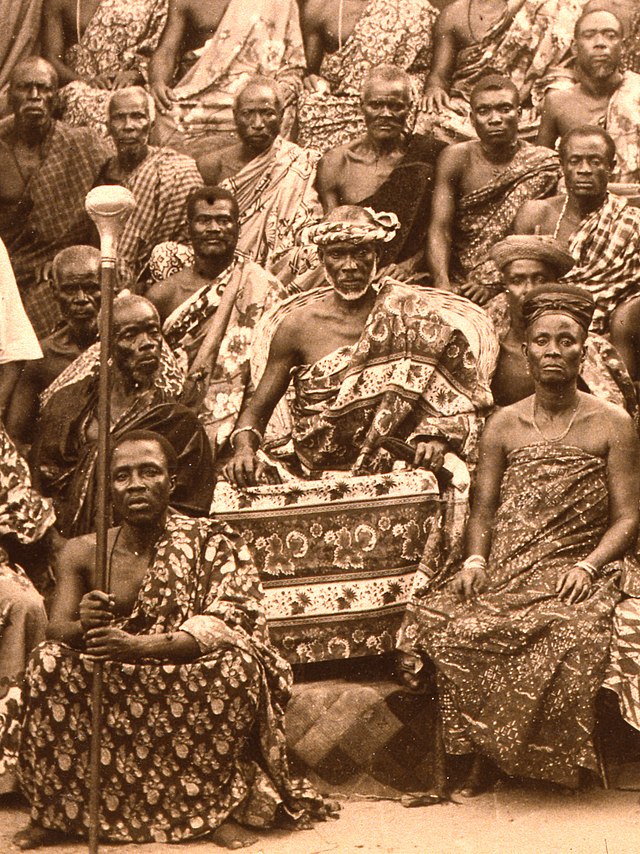 Kobina Gyan was a Ghanaian king who was exiled to Sierra Leone by British colonial authorities for refusing to take an oath of loyalty to the British throne.

Kobina Gyan was born in Elmina to King Kobina Conduah in 1863. During his father’s reign, Kobina Gyan was a sub-king and a major Elmina community speaker.

When the Fante Confederacy sieged Elmina in 1867 as a result of the Anglo-Dutch Convention for the Exchange of Territory on the Gold Coast of Africa (Present-day Ghana), Kobina Gyan co-authored the August 1868 petition to King William III of the Netherlands, asking for help and assistance while his father did nothing.

After his father was removed in January 1869 for not firmly opposing Dutch governor George Pieter Willem Boers’ approach to the siege of Elmina, Kobina Gyan was crowned the new king of Elmina on July 15, 1869.

During his reign, Kobina Gyan first relied on the wealthy and intelligent Elmina trader George Emil Eminsang for support and counsel.

Both were initially opposed to the British cession of Dutch properties on the Gold Coast, which was being negotiated at the time.

When it became clear that the cession would take place, the Realpolitiker Eminsang volunteered his services to the British authorities, while the idealist Kobina Gyan remained opposed to British control.

Kobina Gyan, who openly despised the British, learned of the Dutch plan to transfer all their possessions in the Gold Coast to the British and did everything he could to prevent the transfer from taking place, but the Gold Coast Treaty of 1871 eventually ceded the entire colony to the British for about 46,939.62 Dutch guilders, much to Konbina Gyan’s great annoyance.

Also read: The Golden Stool of Asante People in Ghana

Following the sale of the Gold Coast to the British, the Dutch Lieutenant Governor Jan Helenus Ferguson, who was aware of Konbina’s dislike of the British, arrived in Elmina in November 1871 to effect the transfer of all Dutch possessions to the British.

While there, he also overthrew Kobina Gyan because he feared he would cause a problem for the British.

On 6 April 1872, the British took possession of Elmina, and the first thing the British colonial authorities did to win the hearts of the people of Elmina was to restore Kobina Gyan as king on 8 May 1872.

Kobina Gyan is exiled from Elmina

Ten months after his reinstatement, Gold Coast governor Robert William Harley decided to put Kobina Gyan to the test by having him sign an oath of allegiance to the British. When Kobina Gyan refused, he was detained and sent to Sierra Leone by boat.

Kobina Gyan had been in exile for 21 years before being given compassion by Elmina’s new District Commissioner Hendrik Vroom.

On March 12, 1873, before dawn, the whole Elmina administration was summoned to the castle’s Palaver Hall.

Kobena Gyan was escorted by only five chiefs. They were all required to swear allegiance to the English.

“The castle belonged to the Dutch government, before, and the people of Elmina were freemen; they are no slaves to compel them to do anything. When Governor Pope Hennessy came to take this castle he did not consult me before the English flag was hoisted; if he had considered me as the king he would have done so. On account of the hoisting of the English flag of the castle of Elmina the people have brought me great trouble. They have disgraced me. They themselves told me not to accept the flag. I also refused to accept the flag. Some of the people then changed their minds, and, as I would not do so, went to Gov. Ferguson and begged for ammunition to fight against me. Gov. Ferguson gave the ammunition. Gov. Ferguson then sent his colonial secretary and three other officers with a paper for me to sign. The governor offered me as a bribe a large sum of money to let that transfer go on smoothly and end peaceably. I refused the bribe because had I taken it, chiefs would have turned round on me afterward and said I sold the country for money”.

The king was then told to take the oath of allegiance and sign a piece of paper in front of him; he became agitated and upset, slammed the table with his fist, and declared,

“I am not scared of your power.” If you want, you can hang me. I will not sign any documents. I and some Elmina residents took a fetish oath to fight the English government’s visit to Elmina, and we have yet to break that oath.”

Kobena Gyan’s fate was sealed with that act of defiance.

He was arrested alongside the other two dissident chiefs, thrown onto the waiting Seagull, and carried to Cape Coast, where he was imprisoned in a debtors’ jail.

They were exiled to Sierra Leone without accusations or a trial. He came on April 30, 1873, depressed, broken, and disappointed.

He was concerned about his family, wives, and children. He remained firm in his belief that Elmina should not be taken and traded between European countries at will.

Four years after his exile, his people petitioned the British for his return, missing their monarch.

This was allowed on the condition that he return to Elmina as an ordinary citizen. He refused the stipulations because he was exiled as king.

On 17 May 1894, Kobina Gyan returned to Elminan soil and was declared king once more with the assistance of Elmina District Commissioner Hendrik Vroom.

Kobina Gyan died less than two years later, on March 12, 1896. He was laid to rest in Elmina’s Dutch Cemetery.

In May 2005, Elmina’s Trafalgar Square was renamed Kobina Gyan Square, and a statue honoring Kobina Gyan was placed in the center.

Nana Kobina Gyan never flew the English flag handed to him by Pope Hennessy and refused British payment of kostgeld.

In honor of this great king of Edinaman, a wreath was laid at the Kobina Gyan square, and a libation will be poured in his honor.

Kobina Gyan has since his death been regarded as a principled king who fought for his people.

He is still very much remembered and talked about in Ghana.