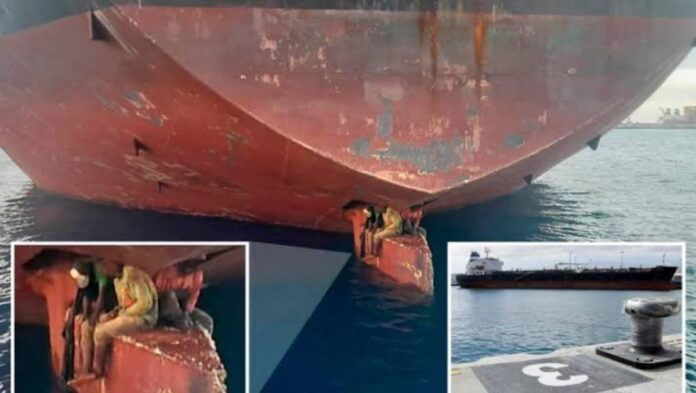 The Spanish Sea Rescue Service rescued three stowaways at the helm of a ship in the Canary Islands after the ship left Nigeria.

The men, found on the tanker Alecenne 2 in Las Palmas port, showed symptoms of dehydration and hypothermia after spending about 11 days clinging to the tanker’s rubber.

Spaniard Salvamento Maritimo said the three were taken to hospitals on the island for medical attention.

According to ship-tracking website MarineTraffic, the Maltese-flagged vessel left Lagos, Nigeria, on November 17 and arrived in Las Palmas on Monday.

Although very dangerous, it is not the first time that stowaways have traveled to the Canary Islands at the helm of merchant ships.

According to the Red Cross, more than 20,000 migrants crossed the coast of West Africa to the Canary Islands last year. The organization said more than 1,100 of them died at sea.

In 2020, four Nigerian stowaways survived 10 days at sea before being found hidden in a cabin above the wheel of a Norwegian oil tanker sailing from Lagos to Las Palmas, according to Norwegian media.

That same year, a 14-year-old Nigerian told the Spanish newspaper El Pais that he hid in a room above the rudder of a fuel-laden freighter for 15 days during a voyage from Lagos to the Canary Islands.

The Red Cross says poverty, violent conflict and the search for work continue to fuel migration from West Africa.

Share
Facebook
Twitter
Pinterest
WhatsApp
Previous article
Bai Bureh: Hero of the 1898 Conflict in Sierra Leone
Next article
Kobina Gyan: The Ghanaian King Who Was Exiled to Sierra Leone for 21 years For Standing Up to British rule