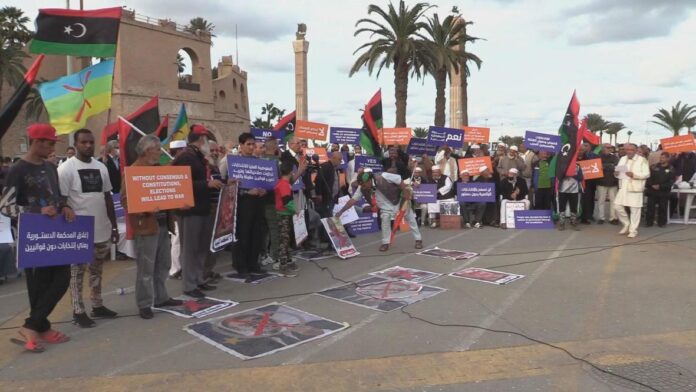 We previously reported, that the son of former Libyan President, Muammar Gaddafi’s son has announced that he will be running for the president of Libya. However, the news didn’t seem to go down well with Libyans as they have taken to the streets to protest “war criminals”.

Hundreds of Libyans have taken to the streets in protest in Tripoli against; “war criminals” running in next month’s presidential election. This comes after eastern-based warlord Khalifa Haftar and a son of late ousted leader Muammar Gaddafi announced presidential bids.

Libyan Demonstrators stamped on posters of Haftar and Saif al Islam Gaddafi on Friday; voicing anger over an electoral law criticised for bypassing due process and favouring a bid by Haftar, a warlord.

One speaker called for; “all those who have committed crimes against the Libyan people” to be disqualified from the race.

“The blood of our martyrs wasn’t spilt in vain,” said another.

The protests come at the end of a week that saw both Haftar and Gaddafi register to run in the December 24 election; which is part of a United Nations-led process attempting to draw a line under a decade of conflict since the fall and killing of Gaddafi senior in a 2011 revolt.

Protesters shouted; “Yes to elections, no to criminals!”