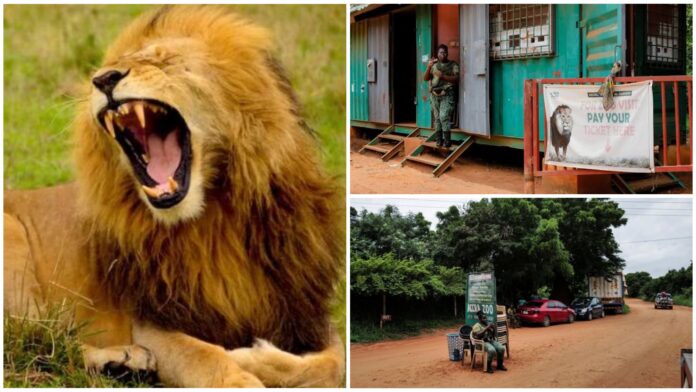 A lion at a zoo in Ghana killed a man who jumped over the fence and fell into its enclosure on Sunday, wildlife officials said in a statement.

The man was attacked by the lion after jumping over security fences at the zoo in the capital Accra, said the Forestry Commission, the state agency responsible for wildlife in Ghana.

“The intruder was attacked and wounded by one of the lions within the inner perimeter of the enclosure,” the statement said, adding that he died of his injuries.

The lion, a lioness and two cubs are still safe in their enclosure at the Accra Zoo, he added.

A police spokesman told AFP: “We are investigating the case to determine how the man entered the restricted area.”

Accra Zoo was founded as a private zoo by Ghana’s first president, Kwame Nkrumah, in the early 1960s. Accra Zoo was opened to the public after its fall in 1966.

Recall that there have been several animal attacks recently with news of a Kenyan man fighting off a leopard with his bare hands.

Quite recently, Ndumiso Mona became an overnight hero to many after he put on a brave fight against a stray leopard.

It was a matter of life and death for Ndumiso Mona hospitalized after he was confronted with a stray leopard that had escaped from Kruger National Park.

According to the most quoted part of the News 24 version of the incident, Mona said, “I looked death in the eye, I was ready to punch like a boxer, I told myself one of us should die.” The News24 article went viral.

Despite being the last survivor of this leopard-human battle, Ndumiso Mona had to be hospitalized after the incident.

He reportedly received medical treatment for injuries to his hands, body and face.

This unusual fight gained traction on social media, with many users ready to crown Ndumiso Mona as the ‘true’ Zulu king.