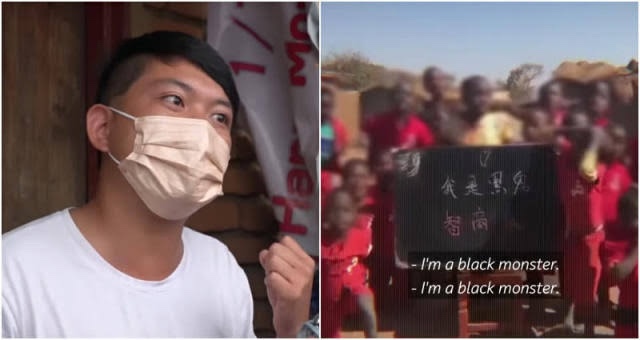 A group of Malawian Law students has demanded that a Chinese national recently accused of racist acts within the country be made to face the full wrath of the law.

The Chinese man was arrested in Zambia after he was caught filming Children, singing and chanting racist comments about Africans, their governments, and their culture. The fugitive has been on the run after his video caught the attention of the Malawian authorities.

However, he was arrested on Monday while on the run in Zambia. “He was arrested in Chipata, Zambia after fleeing the country through uncharted routes,” Malawi immigration spokesman Pasqually Zulu told AFP.

The Chinese national, whose name has been identified as Lu Ke, is currently facing charges of exploiting Malawian Children. According to the authorities, he took advantage of the Children, taught them to sing in Chinese, and used their zeal to learn in an attempt to throw racist comments at their nation and community.

Sadly, the children were heard singing and chanting in Chinese, perhaps unknowingly to them, they chanted nasty commentary against themselves and their country. After shooting videos of these kids, Lu Ke went ahead to sell the videos to Chinese social media.

In the video, the children could be heard chanting and singing loudly; “I am a monster with low IQ.” These videos have since caused outrage in Africa and among black communities around the world.

Read also; African Nations Have Failed To Benefit From Abundant Oil On The Continent, IEA Warns

“We want him to stand trial in Malawi,” police spokesman Harry Namwaza told AFP, saying his country would seek Lu’s extradition. In response to the outrage and the continuous display of racist acts in recent times from its nationals, the Chinese embassy in Malawi gave a statement, condemning the act.

“It shall be stressed that the Chinese government has zero-tolerance for racism,” the embassy stated. It further added that its home country, China, has been doing all in its capacity to ensure a crackdown on unlawful online acts in the past years and will continue to do so.

“The embassy will closely work with the Malawi side and see to it that this unfortunate issue is properly addressed,” the statement read.

Reacting to the issue and protests by Malawian students, the country’s foreign affairs ministry revealed that they will begin a process of communicating with their Chinese counterpart on addressing the issue and others like it.

The ministry’s spokesman John Kabaghe said; “We are trying to manage whatever aspect of this that involves us working with the Chinese government. For the rest of the other aspects, those are internal issues that are being handled by internal state organs.”

Since Malawi and China established ties in 2008 over Taiwan, diplomatic relations have existed between the two countries. China has contributed millions to 21 development initiatives since 2000, including a $70 million expressway connecting Malawi and Zambia.