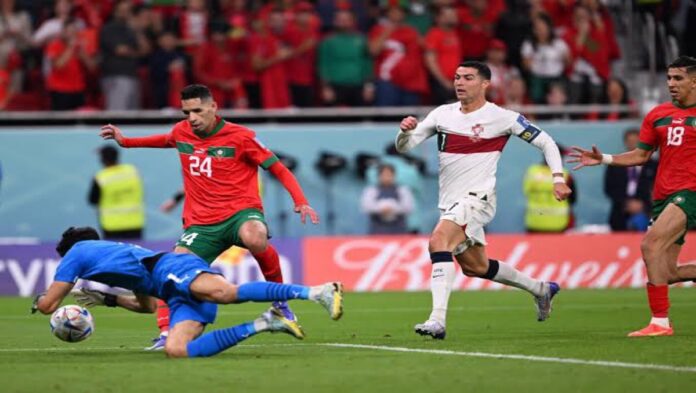 Morocco made history at the magnificent Al Thumama Stadium in Doha, Qatar by becoming the first African country to secure their place in the semi-finals of a World Cup.

In the first quarter-final game of the day, Youssef Al-Nusairi scored the winning goal when he leapfrogged Portugal goalkeeper Diogo Costa in the 42nd minute and found Yahya Atiyatallah’s cross with a huge header to give the North African country a shock victory.

Morocco, now the pride of Africa, is the continent’s hope for the ongoing World Cup. Moroccan goalkeeper Yassine Bounou saved a shot from Portuguese striker Ronaldo in the quarterfinals.

Morocco have become the first African team to reach the semi-finals of the World Cup after beating Portugal 1-0 on Saturday.

Also, read; Wizkid Becomes First Nigerian Singer With Diamond Certification In The US

Morocco defeated the other three African teams to reach the Quarterfinals – Cameroon 1990, Senegal 2002 and Ghana 2010.

Portugal upped the pressure after the break but injury-plagued Morocco, who had three of the four previously set-up defenders on hold of captain Romain Saïss, were suspended despite being reduced to 10 men in extra time.

Five-time Ballon d’Or winner Ronaldo was dispatched by coach Fernando Santos early in the second half but failed to save the Euro 2016 winner.

Instead, it was another day celebrated by Morocco after surprise victories against Belgium and Spain on penalties in Qatar.