Wizkid Becomes First Nigerian Singer With Diamond Certification In The US 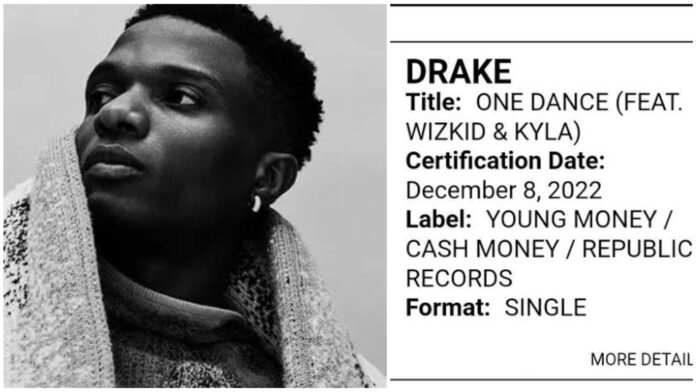 Singer Ayodeji Balogun, also known as Wizkid, made history with his recent breakthrough in the United States.

His participation in Drake’s song “One Dance” which has sold more than 10 million copies in the United States, has earned him a Diamond certification.

The Recording Industry Association of America (RIAA) made the announcement after updating its database on Thursday to reflect the new entry.

“One Dance” is a song from “views”, Drake’s fourth studio album.

It features guest vocals from Wizkid and British singer Kyla, who both co-wrote the song with the producers.

“One Dance” was released for digital download in April 2016 and was broadcast to urban, rhythmic, and contemporary radio in the US.

Since its release, the song which infuses both “Dancehall and Afrobeats” has reached number one in 15 countries including Australia, Canada, France, Germany, Ireland, the Netherlands, New Zealand, Switzerland, the United Kingdom, and the United States.

It became Drake’s first number one single in all fifteen countries as lead artist.

It sold two million copies in the United States in 2016, becoming the fifth best-selling song of the year and then the most-played song on Spotify with over a billion unique streams.

It was the best song for Apple Music that year. It achieved the success of Monsters even before it was certified Diamond in the United States.