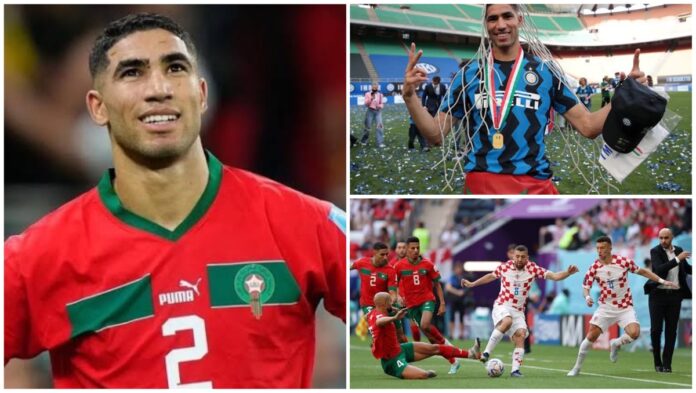 The Moroccan national team and Paris Saint-Germain right-back, Achref Hakimi has had a stadium named after him in his hometown of Ksar El Kebir in northwest Morocco.

The Achref Hakimi Stadium was renamed in honor of the country’s FIFA World Cup wins and in appreciation of Hakimi’s efforts.

Morocco’s Atlas Lions reached the semi-finals of the FIFA World Cup but were knocked out by France.

Hakimi put on an impressive display in Qatar as Panenka scored to seal Morocco’s surprise victory over La Roja and marked Morocco’s first ever qualification to the quarter-finals of the tournament.

After that difficult victory over Spain, the Moroccan team managed to defeat Portugal in the next game and become the first African and Arab country to reach the semifinals of the World Cup, an event celebrated throughout Morocco, Africa, and the Arab world.

After returning from Qatar on December 20, the Moroccan national team was warmly welcomed by the Moroccan fans who crowded the streets of the Moroccan cities of Sale and Rabat to welcome the players.

On the same day, King Mohammed VI received the Moroccan team at the Royal Palace in Rabat, where he awarded them with the Royal Medal(s) in recognition of their historic trajectory in the World Cup.